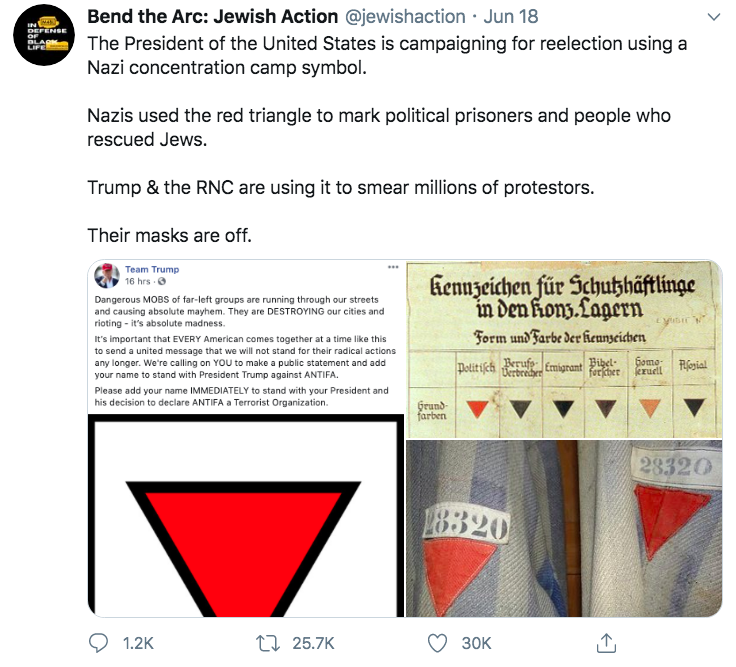 In Facebook ads from Team Trump, Mike Pence, and Trump himself, the campaign warned about “dangerous MOBS of far-left groups” above a massive image of a red triangle.1

Nazis used the red triangle to mark political prisoners and dissidents during their genocide. Now, in 2020, the Trump campaign is using it to target Black-led protests across the country — and Facebook enabled this bigotry and disinformation.

At Bend the Arc, we immediately sprang into action, sounding the alarm with a now-viral Twitter thread, working behind the scenes with our friends at Equality Labs, and growing public pressure across social media and in over 100 news stories.

We directly called out Facebook for enabling Trump’s action. After pressure from millions of people, they did something they haven’t done before: they took the ads down for violating their policy on “organized hate.” 2,3

But Facebook has more work to do. This is not the first time Trump has engaged in “organized hate.” (It’s his entire brand.) We don’t just want Facebook to take down Trump’s Nazi ads. We want them to take responsibility for hatred all over the site.

Join us in telling Facebook that it’s time for them to take anti-Black racism as seriously as Nazi imagery.

Public outcry works. Facebook took down these ads because of outrage from people like you  — alongside research and advocacy from Equality Labs and years of lobbying against hate on tech platforms from groups like Color Of Change and Muslim Advocates.

We’re glad that Facebook took this step so quickly. But they also left up hundreds of other ads from the Trump campaign spreading false and dangerous accusations about millions of Americans protesting in the streets to defend Black lives.

It’s part of Facebook’s history of enabling the use of anti-Black racism for political gain by politicians, including messages from Trump advocating violence against Black protesters, like when he posted about shooting people (which Twitter blocked).4

For five years, our friends at Color of Change, the nation’s largest online racial justice organization, have called on Facebook to make their platform safer for the millions of Black people that use it, but Facebook has never taken down one of the President’s posts or ads before this moment.5

As Jews and allies, we must get into the fight to demand Facebook take anti-Black racism as seriously as it does antisemitism and Nazi imagery.

Tell Facebook to take action against hate and violence on its platform now by firing policy chief Joel Kaplan and developing new policies to prevent this from ever happening again.

In solidarity with the movement for Black lives,

PS: In the midst of a nationwide uprising where we are being called upon to defend Black lives, we must ensure that Black lives matter on our tech platforms, too.

Add your name to demand that Facebook take concrete steps to stop anti-Black racism on its platform.