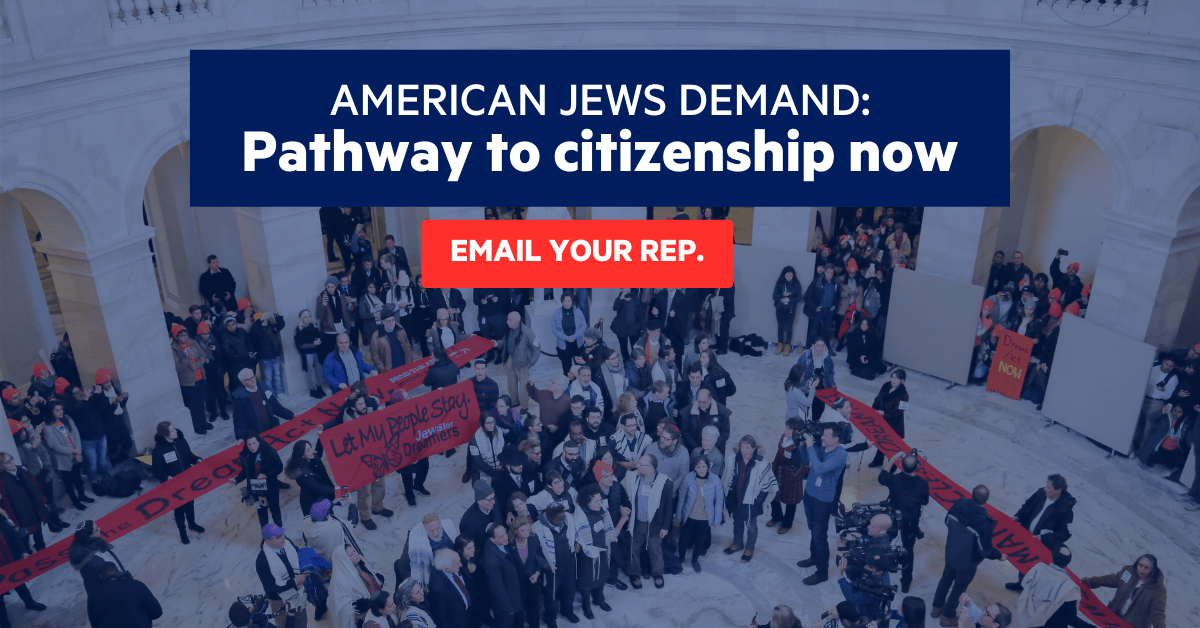 Photo: Bend the Arc's action with rabbis and leaders in the Capitol for the Dream Act in 2018

This is a time sensitive message: Next week the House of Representatives is voting on two bills that provide long overdue pathways to citizenship for more than 3 million immigrants.

After four years of increased raids, deportations, and family separation, we kicked Trump out of the White House and won both houses of Congress for this moment: the chance to repair the damage of the last 4 years, address 400 years of institutional racism, and build toward a multiracial democracy.

This is our opportunity to make sure every Representative knows that a pathway to citizenship for 11 million of our neighbors, family members, and friends is a moral necessity for our time — these bills are the first step. The louder we are now, the more likely these bills pass AND Congress continues the necessary work to transform our immigration system.

Use this tool to send an email to your Representative, and read on below for more details on both bills being voted on next week.

As a multiracial Jewish community, we come from many backgrounds and experiences, but we share a central story of migration and liberation. We are fighting to replace the current immigration system because it’s built on an ideology of exclusion and racism that threatens all of us — from the system that separates families and detains children, to acts of white nationalist terror in our synagogues and public spaces.

We can even see remnants of that ideology in these bills, which are not perfect. By including exclusions for some criminal records the bills perpetuate the racism of our criminal justice system that disproportionately harms Black and Brown communities and wrongly decrease the number of people eligible for these crucial pathways to citizenship.

As our partners in the We Are Home coalition write:

Send a message to your Representative now to voice your support for inclusive immigration legislation that leaves no one behind.

Three million people stand on the cusp of winning dignity and civil rights because of the massive movement that immigrants and allies have built demanding respect. Bend the Arc is proud to be a part of that movement, from fighting to pass immigration reform in 2013 to rising up for the Dream Act with the largest act of Jewish civil disobedience in the halls of Congress in 2018, and in cities across the country.

During the last four years, we rose together with our neighbors to defend against cruel immigration policies rooted in the worst parts of our country’s history. Now, our 2020 electoral victories mean we can start repairing the damage of these last 4 years and begin dismantling 400 years of racist systems — to use the power we have built to transform our country into one where everyone is truly safe. Let’s get to work.