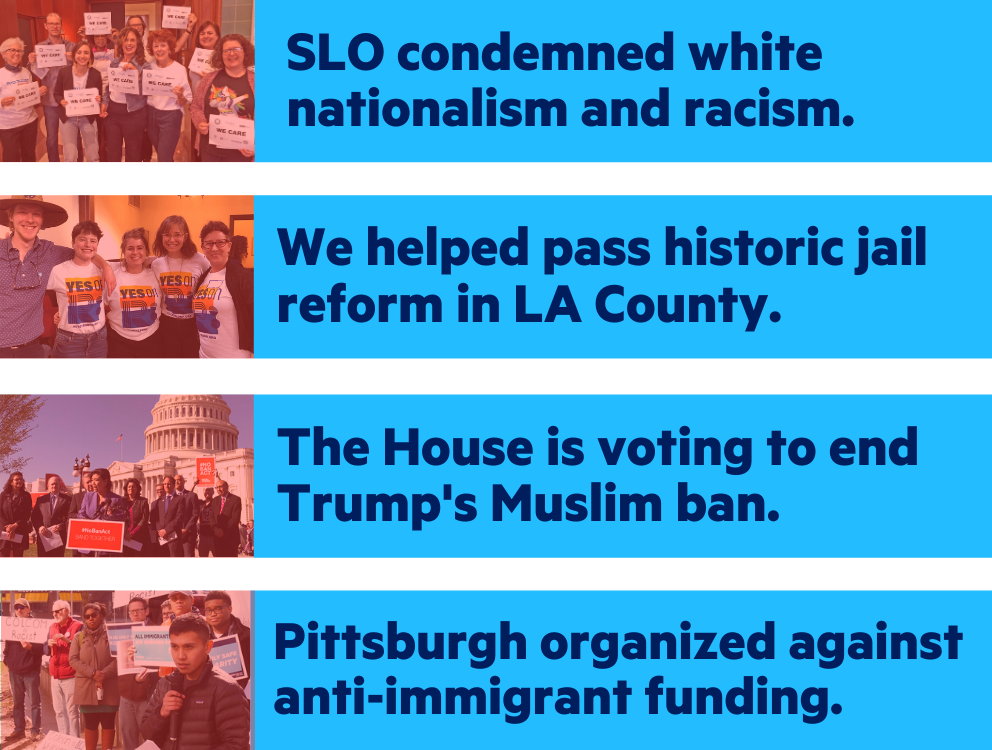 Every day, Bend the Arc members across the country are organizing to protect all communities targeted by bigotry and violence.

It's why we just launched our We Rise As One campaign to build a country that is truly for all of us — and we already have incredible news to celebrate.

Here are four stories of bold, loving, moral action by Bend the Arc leaders and allies. If you’re inspired by this work, please consider making a donation to build this movement’s power.

This comes on the heels of their victory in January, when — as part of a powerful community response — they successfully removed from office a public official who had posted Islamophobic, racist, and antisemitic content on social media.

You can read SLO leader Dona’s beautiful D’var Torah this week reflecting on the spiritual role of the Mishkan and the power of collaboration in our mission for social justice.

Measure R passed by a landslide in Los Angeles County! Measure R will bring accountability, transparency, and fairness to LA County’s criminal justice system and lay the groundwork for transformational change in jail systems across the country.

As part of a movement powered by Black Lives Matter and community organizations, Bend the Arc leaders organized house parties and led dozens of phonebanking and canvassing shifts to support this historic policy for a future based on care, not cages.

You can read the case Bend the Arc leaders made for Yes on R in the Jewish Journal.

Just weeks ago, President Trump doubled the size of the Muslim Ban: now banning 25% of all Africans and millions of Muslims because of their race or religion.

Next week, the House is voting against Trump’s racist and anti-Muslim agenda, and we’re amplifying the call for the NO BAN Act (H.R. 2214) with our partners at Muslim Advocates, Daily Kos, and more.

Sign if you agree: immigrants and refugees should be welcomed here.

The letter will be delivered in gratitude next week to Rep. Judy Chu, who is the lead sponsor in the House. Afterwards, the coalition will bring the fight to Senator McConnell’s door.

This week, Bend the Arc: Pittsburgh leaders joined immigrant, environmental, and labor groups in calling out the Colcom Foundation for funding hate groups.

Colcom is based in Pittsburgh and known for boosting anti-immigrant and white nationalist organizations — giving over $150 million since 2005.

Here’s what Pittsburgh leader Avigail had to say: “We know the dangers of masking hate as science. As Pittsburgh Jews, we know the funding of anti-immigrant groups endangers us too.”

Read more about their work in the Pittsburgh City Paper.

From Pennsylvania to California to Washington, DC, Bend the Arc leaders are showing up as Jews and making tangible change in their communities.

It’s a core part of our mission at Bend the Arc — to equip local Jewish leaders with the tools they need to win progressive victories, show up for communities under attack, and hold elected officials accountable.

In 2020, this fight will be even bigger — and your financial support helps make it possible. Donate $18 to Bend the Arc today.

Thank you for all you do. Together, we’ll keep fighting for a country where all of us are safe and free.

In solidarity and with gratitude,