Joint letter signed by over 600 Jewish denominations, organizations, and synagogues represents over half of Jewish people in America

Today, Friday, August 28th, 2020, coinciding with the anniversary of the 1963 March on Washington and Dr. Martin Luther King Jr.'s famous "I have a dream" speech, over 600 Jewish denominations, organizations, and synagogues published a full page advertisement in the New York Times with a joint letter affirming unequivocally that Black Lives Matter. The list of signatories includes three Jewish denominations (Union of Reform Judaism, United Synagogue of Conservative Judaism, Reconstructing Judaism and the Reconstructionist Rabbinical Association) which collectively represent more than half of all Jewish people in America. The full letter and list of signatories is available here.

“We speak with one voice when we say, unequivocally: Black Lives Matter,” the letter reads. “The Black Lives Matter movement is the current day Civil Rights movement in this country, and it is our best chance at equity and justice. By supporting this movement, we can build a country that fulfills the promise of freedom, unity, and safety for all of us, no exceptions.”

The full-page advertisement will run today in the Washington, DC metropolitan area, the site of the 1963 March on Washington for Jobs and Freedom. 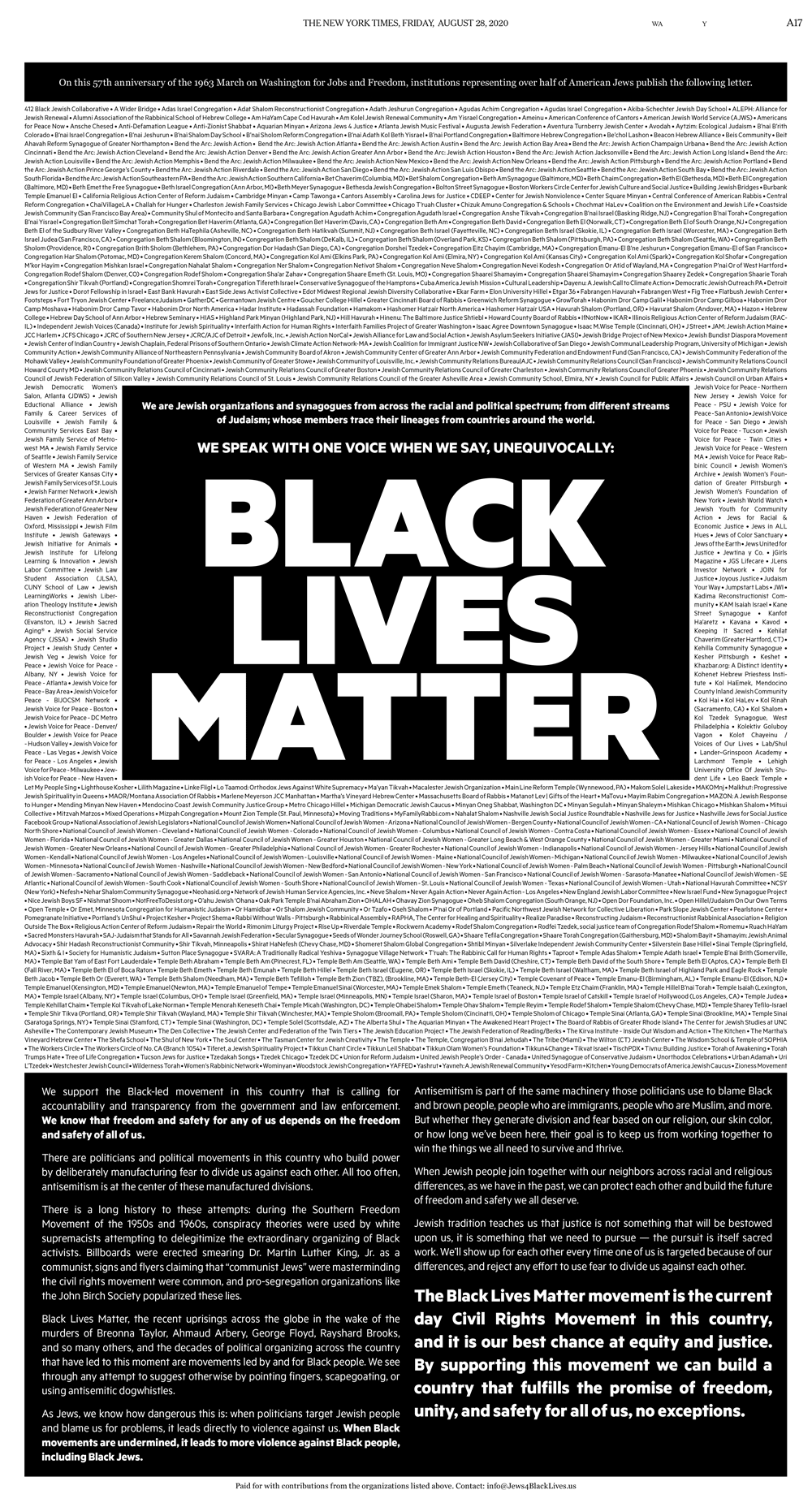 The joint letter was originally released in June. It was coordinated by a diverse group of Jewish activists from across a range of religious, political, gender, and racial identities who saw emerging attempts among some politicians and media outlets to drive a wedge between Jews and Black-led movements, and efforts to delegitimize those Black-led movements by using antisemitic conspiracy theories and dogwhistles.

"Sometimes when you reach out for allies, you find family,” said Jared Jackson, founder and executive director of Jews in ALL Hues. “There have always been Black Jews in movements for Black liberation and in Jewish communities; we know that racism and antisemitism are connected and we are targeted and harmed by both. For Black Jews, separating our Jewishness and our Blackness is impossible, and the attempts to divide these two intertwined worlds within which we live is particularly painful. If we're going to take care of all our family, we need to take care of all our family."

“This is an important moment in our struggle for collective liberation, and our support for Black lives is unquestionable. I’m proud to represent one of so many organizations joining together to send a clear message that we stand with Black-led movements for liberation,” said Audrey Sasson, executive director of New York-based Jews for Racial and Economic Justice. “The claim that white “Marxists,” “communists,” “globalists” or “elites” are the secret puppetmasters behind the Black freedom movement is a tired, old, racist and antisemitic conspiracy theory. All of these terms — “communist,” “elite,” “globalist,” are antisemitic code words for Jews, and they are used in attempts to delegitimize and discount visionary Black leadership. To any politician or pundit who uses these dog-whistles: we will not allow you to divide us against each other based on our religion, our race, or any other aspect of who we are. We stand with Black people, including Black Jews, today and every day.”

“It is incumbent upon our Jewish community, especially white Jews, to rise up for Black lives using all of our spiritual, political and intellectual resources,” said Rachèl LaForest, chief program officer at Bend the Arc. "When we join together across racial and religious differences, when we rise as one, we can build a new America where it is safe to sleep, walk, drive, shop, jog, live, and love while Black. Our Jewish community is committed to Black lives and Black liberation, including Black Jews.”

Responding to the letter's original publication in June, Maurice Mo Mitchell, executive director of the Working Families Party, tweeted: "We know our enemies and we know our comrades. White supremacists traffic in, benefit from, and advance anti-Black racism and antisemitism. Their desperate attempts to divide us are so intense because we are winning. #DefendBlackLives #BlackLivesMatter #DefundThePolice"