The DACA decision means our Jewish campaign for a pathway to citizenship is more important than ever. Donate $18 today to help win permanent protections for immigrants.

On Friday, the weekend of Tisha B’Av — the saddest day of the Jewish year — a federal judge in Texas partially ended DACA.

We mourn these cruel attacks against immigrant young people and their families. We know that temporary protections will always leave our immigrant family and friends vulnerable. DACA is the floor, not the ceiling.

That’s why our Jewish communities are rising for a pathway to citizenship for millions of immigrants. We won a Democratic trifecta to repair the damage of the last four years and beyond, and now the Senate is expected to start moving forward the “budget reconciliation” bill THIS WEEK that could deliver on their immigration promises.

We need your support to scale up our immigration campaign for this coming budget fight. Donate $18 to support our Jewish organizing for a pathway to citizenship.

Here’s what the DACA decision means: 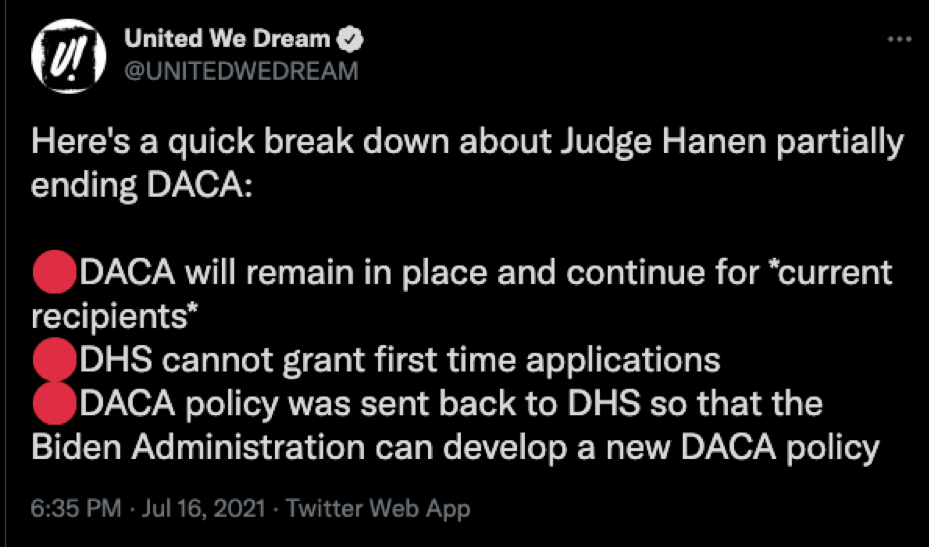 Here’s what we are hearing from our partners:

And here’s what we are hearing from members of Congress:

The DACA decision underscores the urgency of our fight as Jews and allies to win permanent protections and dignity for immigrant communities, including members of our Jewish communities.

Now, a pathway to citizenship for millions is a REAL POSSIBILITY because of the work we have done with our partners in the We Are Home coalition. Here's how Politico is reporting on it:

"The [budget reconciliation] tactic — which just months ago seemed like a long shot even to liberals — is now widely seen as President Joe Biden’s best shot at confronting one of Washington’s policy leviathans and delivering on a decades-long party promise."1

Help us make sure a pathway to citizenship remains in the final reconciliation bill. Donate $18 now for this summer's fight for immigrant justice.

Until justice is real,

PS: The court fight isn’t over yet — President Biden has said that the Department of Justice will appeal this decision and DHS Secretary Alejandro Mayorkas said his agency “remains focused on safeguarding DACA…[and] processing DACA renewal requests.” 2 This is another reason it matters that we secured a trifecta and kicked Trump out of the White House. Our next step is the budget fight happening right now: invest in our organizing to protect immigrants today.