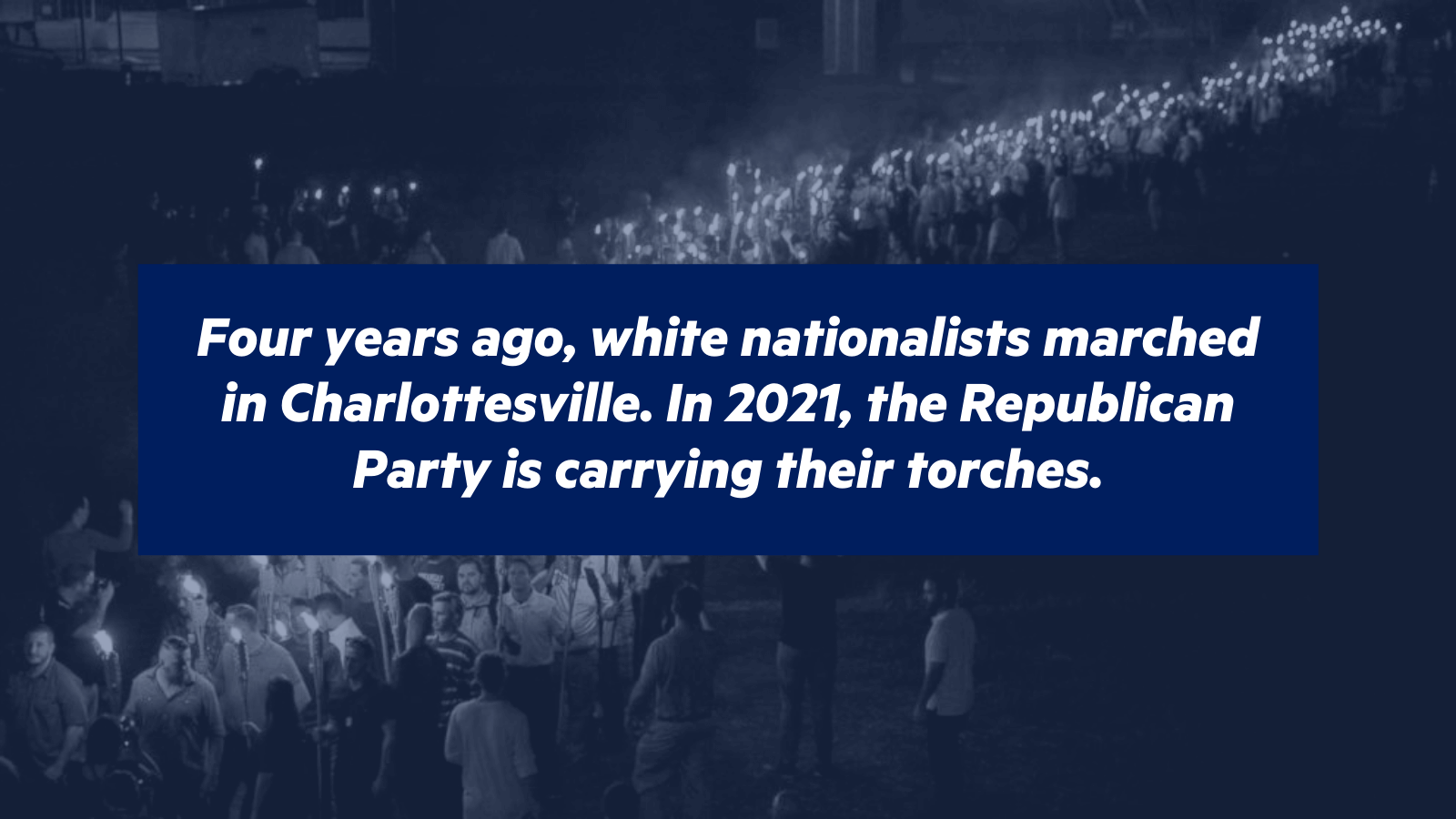 Today marks four years since the violent Unite the Right rally in Charlottesville.

White nationalists may not be marching in the streets today with torches, chanting “Jews will not replace us,” but they remain a threat to our democracy.

In 2021, the Republican Party is carrying their torches. From their filibuster of the bipartisan January 6th commission to their ongoing efforts to suppress the votes of millions of Americans, the GOP is deeply committed to white supremacy at all costs.

Bend the Arc is organizing to defeat them at every turn: when they block progressive legislation, campaign to suppress our votes, and attack our communities.

Donate $18 to power Bend the Arc’s work to reveal the racism and anti-semitism central to the GOP playbook and kick white nationalism out of the halls of power.

In 2020, we kicked white nationalism out of the White House. Now, we need to remove white nationalists from Congress — and we have a proven track record of defeating them.

The photo went viral, making headlines in the Washington Post, CNN, People, and, crucially, the Atlanta Journal-Constitution.1 Loeffler was forced to disavow him, but the damage was already done. Reverend Raphael Warnock, Loeffler’s opponent, continued to highlight her ties to white supremacists and, supported by massive voter turnout driven by Black organizers, won his election to deliver Democrats a crucial Senate majority.

We’re committed to beating back the GOP’s rhetoric of fear and division and electing a Congress that truly represents and fights for us. We need your support to do that — can you donate $18 now to help protect and transform our democracy in 2022?

Luckily, we have a roadmap for where we’re going.

Last year’s uprisings for Black lives brought forth a vision for a country where Black liberation is realized and all of us are more healed and whole. It’s a call to action to strike at the roots of racism and violence in our systems and institutions.

At Bend the Arc, we’re committed to doing that work in the Jewish community by dismantling white supremacy within our own institutions, investing in Black Jewish leadership, and partnering with BIPOC-led movements to organize for our futures.

We’re not just playing defense. We’re going on offense against white supremacy — and we want you to be part of this fight with us. Donate $18 now to invest in Jewish organizing for multiracial democracy.

Thank you for being part of our community,