This is the language Trump uses to describe people of color and immigrants — from his campaign launch denigrating Mexicans and Muslims to his comments this weekend attacking Rep. Elijah Cummings and the city of Baltimore.

This blatant racism isn’t a distraction. It has a clear purpose: to dehumanize black and brown people. It is a tactic with which Jews of all races are painfully familiar, rhetoric identical to the language that the Nazis used to justify genocide.

It’s why I just wrote an op-ed in Haaretz calling on Jews to speak out and take action. We’ve seen this before, and we can’t be silent now. Read it here. 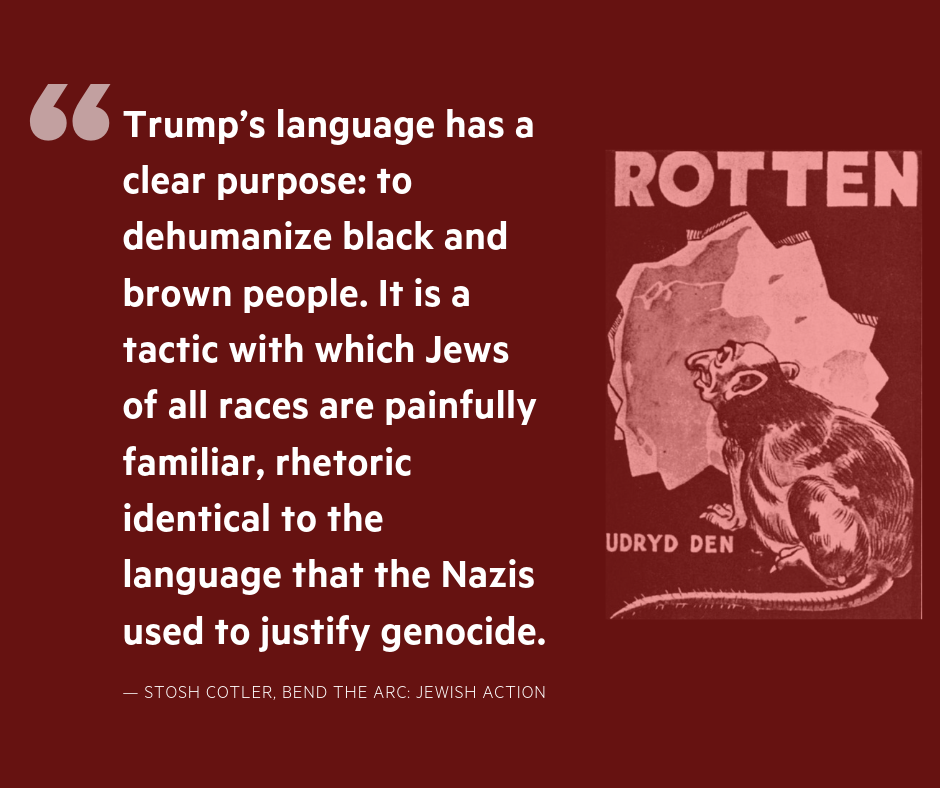 This racism, exclusion, and hatred were echoed in the Charlottesville chant “Jews will not replace us,” motivated shooters in Pittsburgh, Christchurch, Charleston, Poway, and now Gilroy, and drives brutal policies like child detention, mass incarceration, and the Muslim Ban.

As Jews, it is our obligation to condemn racism and xenophobia as well as the overwhelming silence accompanying it. Our history tells us the horrible cost of silence and inaction in the face of such hatred.

Trump’s racist lies and attacks aren’t just rhetoric. They are an existential threat to every one of us.

It’s why our Jewish community cannot — and will not — be silent. It’s why Bend the Arc has been leading Jewish resistance to Trump since 2015, it’s why we worked so hard to flip the House in 2018, and it’s why we’re mobilizing our resources now to grow the Jewish movement to stop Trump in 2020.

P.S. Share our op-ed on Facebook to help bring others into the fight against racism and bigotry and for a thriving multiracial democracy.