The recent spate of violent antisemitic attacks that have taken place in the greater New York area have taken lives, threatened our safety and also generated division within our Jewish community.

Bend the Arc: Jewish Action supports today’s display of Jewish unity that mobilized Jews from all walks of life — Orthodox, Reform, black, white, gay, straight, rich, poor — to march united in the fight against antisemitism in all its forms.

Bend the Arc: Jewish Action is sharing the complete prepared remarks of MaNishtana, whose powerful voice is important to listen to in this moment. To combat antisemitism, in all its forms, we must reach for each other in our Jewish community, and to our allies in other communities. That solidarity is where our truest safety lies. 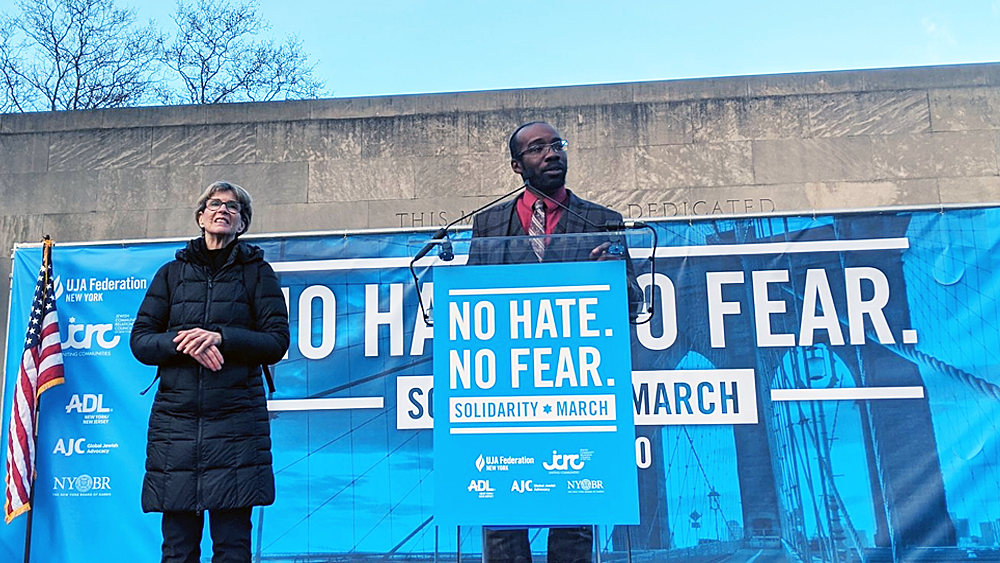 My wife and I have a six year old who is far too smart for our own good. Once, when she was two, my wife and I got into an argument, as you do. It was one of those angry whisper arguments because we didn't want to wake our daughter up in the next room. We went to bed angry, woke up the next day angry and not speaking to each other, but continued getting ready for our respective days. As I'm brushing my teeth in the bathroom, who should come in but my 2 year old. I say morning, she doesn’t say anything, but she takes my hand and leads me out of the bathroom.

My daughter leads me into her room where my wife is getting my daughter's things together for daycare. She brings me as physically close as possible to my wife, then she taps my wife's leg. So there we are, the three of us, awkwardly staring at each other. My wife and I look at our daughter and ask if there's a reason she orchestrated all of this, and she looks at us … and then turns around and walks out of the room. And closes the door behind us. Apparently she was like "'Look, imma need y'all two to work some stuff out, alright? I ain't got the time for your shenanigans today."

Right now, my Jews, we are all my wife and I in that story. And this rally today is the room we've been brought into.

We have Jews from the right and the left, with very different ideas on the sources and causes of antisemitism. We have Jews of color, who are often dismayed that the discussion of race around antisemitic attacks too often devolves into racism, traumatizing us repeatedly as we're simply standing with our fellow Jews, regardless of their race or ethnicity.

But we are all here because antisemitism is an evil that does not differentiate between Reform or Conservative, between left or right, or between black or white. And to have any chance of beating it, we must do it together, in solidarity with both our full, diverse Jewish community with whom we share a faith and a peoplehood and the non-Jewish communities with whom we share our neighborhoods, our streets, and our subways.

That is the solidarity that will truly keep us safe.

But if we expect those in other communities to address their antisemitism and their bigotry--as they should--then we need to be addressing harmful attitudes in our own [Jewish] communities too. Not because it's the reason for anti-semitism, but because it's equally as morally wrong.

At the same time, if we are asking for solidarity from the broader community, we must also be in solidarity with the issues that impact other communities as well. And since we as a Jewish community are black, white, and indigenous; able-bodied and differently-abled; rich, poor and middle class; gay, straight and trans, all those other issues affect us too. There is no issue that doesn't somehow impact some community of our Jewish family because our families are nearly as diverse as America itself.

These are difficult conversations, and the moment demands they be had. But we can neither let these conversations become apologetics for terror, or devolve into racist tirades. No community — Jewish, black, immigrant, Muslim — should have to endure attacks against its existence. Ever.

Together, let's all work towards eradicating those words and deeds of hatred, violence, and fear. Our safety lies not only in our solidarity within our Jewish community, but outside of it as well.