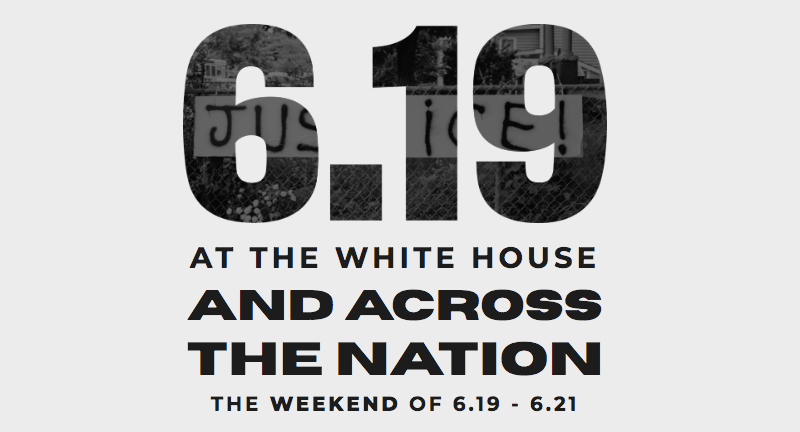 Next Friday is Juneteenth, a day that honors Black freedom and Black resistance and centers Black people’s unique contribution to the struggle for justice in the U.S.

That weekend, June 19-21, the Movement for Black Lives is asking us to show up in the streets to continue the fight for Black lives with three demands: defund the police, invest in Black communities, and call for the resignation of Donald Trump. Bend the Arc will be there.

History and the present moment are colliding: Juneteenth is a celebration of the end of slavery in the United States when on June 19th, 1865, two and a half years after the Emancipation Proclamation, the news of abolition finally reached Galveston, Texas.

In the present day, Trump just announced he is restarting his campaign rallies on Juneteenth in Tulsa, Oklahoma, where almost 100 years ago mobs of white people massacred hundreds of Black people.

Trump’s choice represents one direction for our country — a path of white nationalism, violence, and racial brutality.

The other choice is rising with a Black-led movement “to proclaim in one voice that Black Lives Matter, and that we won’t tolerate anything less than justice for all our people.”

In cities all across the country, this movement is forcing an urgent conversation about shifting massive spending away from policing that doesn’t keep us safe and reinvesting it in a shared vision of community safety, living-wage jobs, schools, housing, and healthcare. With Trump continuing to perpetuate white supremacy from the White House and calling for violence, we must continue rising up for Black lives.

Next week we’ll share more details about this mass mobilization, including Juneteenth actions organized by Black Jews. In the meantime, sign up for updates on the Movement for Black Lives’ Juneteenth mobilization website.