Coinciding with the Jewish fast day of Tisha b’Av, the day on which Jews mourn the violence and destruction that their communities have experienced over centuries, activists called for an end to baseless hatred and demanded justice and compassion for all marginalized communities. Activists also sang, read stories of immigrants separated from their families at the border, and engaged in ritual by chanting Lamentations, the Biblical book traditionally read during the holiday. 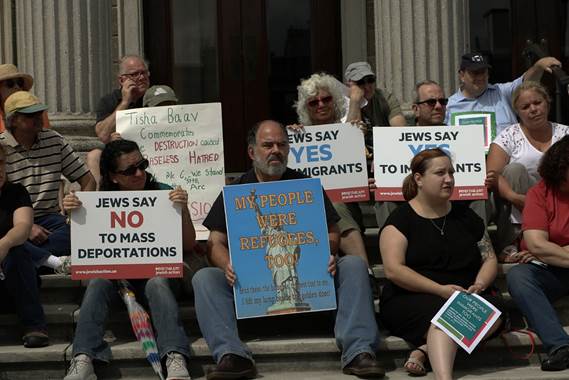 “We are committed to speaking out in solidarity with our immigrant neighbors and demanding an end to all forms of hatred and violence against immigrants here and nationwide,” said Jeanette Walowitz, a leader of Bend the Arc’s New York chapter and Great Neck resident . “On Tisha B’Av, we remember the suffering that our own ancestors experienced and remind ourselves of our duty to bring an end to oppression of the vulnerable in our own time. Nassau County must immediately stop its collaboration and cooperation with ICE, which represents a profound threat to the safety and stability of local immigrant communities.”

Bend the Arc: Jewish Action has been mobilizing Jewish resistance to the Trump administration's “zero tolerance” policies which criminalize immigrant families and refugees, including organizing two recent actions at LaGuardia Airport to witness the arrivals of migrant children, protesting outside the home of Secretary Nielsen, and engaging in civil disobedience in southern California.