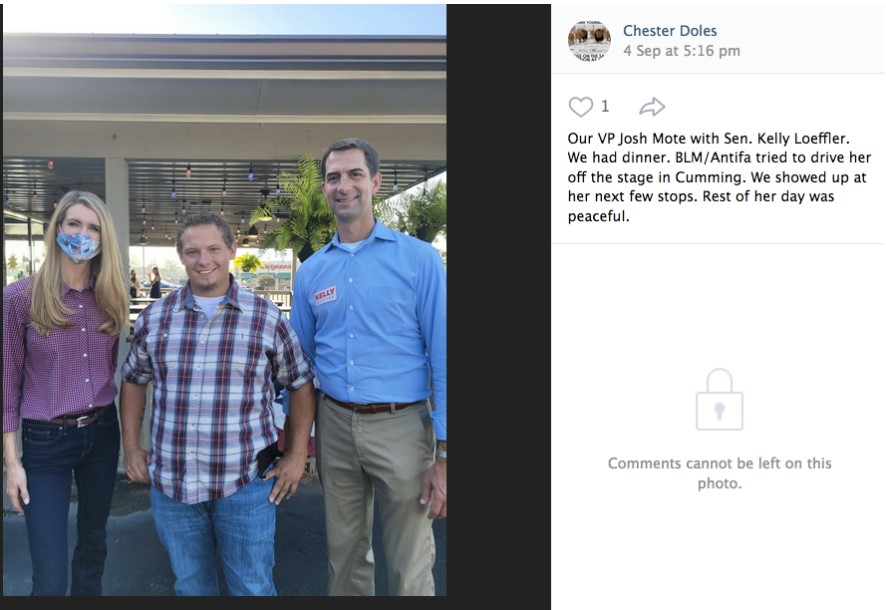 ATLANTA – A newly-unearthed photo of Sen. Kelly Loeffler with yet another leader of a Georgia white supremacist group undermines Loeffler’s claim that she didn’t know the former KKK leader who heads the organization after she posed for a photo with him at a recent campaign event.

Although Loeffler denied knowing former KKK leader Chester Doles, Doles told Popular Information’s Judd Legum on Wednesday that his group American Patriots USA provided security at one of Loeffler’s campaign events on September 3. In addition to Loeffler’s photo with Doles which was unearthed over the weekend, Loeffler also posed for a photo with American Patriots USA vice president Josh Mote along with Arkansas Sen. Tom Cotton.

“These latest photos of Kelly Loeffler posing with white supremacist leaders raise serious questions about Loeffler’s association with far-right extremists and her dubious denials earlier this week,” said Stosh Cotler, CEO of Bend the Arc: Jewish Action. “Why is Loeffler’s campaign claiming not to know a white supremacist group that provided security for her event? Why do KKK members and neo-Nazis find Kelly Loeffler’s campaign so appealing? Why isn’t the Georgia Republican Party concerned about the white supremacists flocking to their cause? Kelly Loeffler claims to speak for our Jewish community while empowering those who would do us harm — we’re going to speak loudly for ourselves and our neighbors at the polls on January 5.”

“Once again, the mask is off when it comes to Kelly Loeffler’s history of pandering to white nationalists to try to win over Trump’s base,” said Raggs. “Sen. Loeffler’s claim to disavow the former KKK leader she posed with rings hollow given her repeated attacks on Black activists and her association with other politicians such as Marjorie Taylor Greene who use racism and antisemitism to spread division and hate.

It’s not a coincidence that a neo-Nazi former KKK leader would be attracted to Loeffler’s campaign. She has been running on a platform of fear and division, all to distract from her own greed and ethics inquiries for illegally profiting off of a pandemic. From sitting down for a friendly interview with white supremacist Jack Posobiec, to her dog-whistle smears of Rev. Raphael Warnock, to her continued support of Marjorie Taylor Greene, Loeffler has clearly made tying herself to extremists part of her electoral strategy.

This has all gone too far. White supremacist protestors in Washington, D.C. are ripping off and burning flags on Black churches while the candidates who incite these attacks are posing with known white supremacists – again. Kelly Loeffler and David Perdue are hoping their lies and ugly rhetoric will divide us against each other and distract us while they line their own pockets, but Jewish Georgians know that we make history by standing up for each other across lines of religion and race. We’ve already kicked fear and division out of the White House, and now it’s time to choose senators who represent the best of the kindness and decency of our state.”

Victoria Raggs is a core leader with Bend the Arc: Jewish Action Atlanta and the executive director of Atlanta Jews of Color Council. She is a disability rights advocate who has worked extensively in multi-ethnic communities to engage issues of diversity, equity, inclusion and justice. A mother of four, Victoria has served on numerous committees and associations at Jewish day schools such as The Atlanta Jewish Academy, The Epstein School, and The Weber Jewish High School.