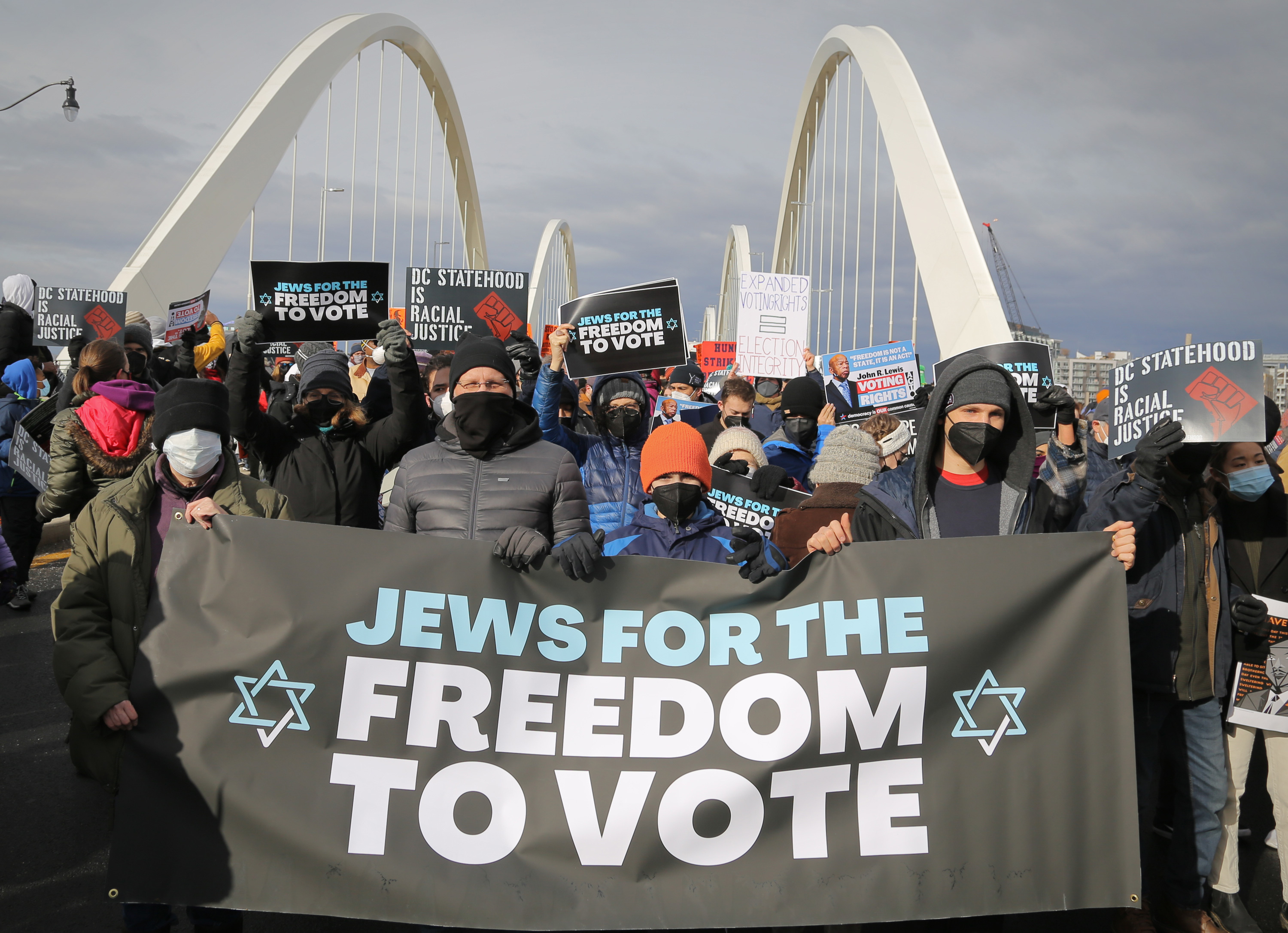 WASHINGTON – A coalition of Jewish Americans representing Bend the Arc: Jewish Action, National Council of Jewish Women, the Religious Action Center and The Workers Circle joined the family of Rev. Martin Luther King, Jr. on Monday in Washington along with people from DC and all over the country marching for legislation that would protect the freedom to vote, no matter our color, background, or zipcode.

Winter weather couldn’t stop Monday’s march, which went forward as part of a week-long action led by Martin Luther King III, Arndrea Waters King, and Yolanda Renee King to send a clear message to Congress: there can be no celebration of MLK Day without legislation to restore, protect, and expand the right to vote. The march demands the Senate join the House in passing the Freedom to Vote: John R. Lewis Act, which would create national standards to ensure every vote counts and help stop the coordinated effort by partisan politicians in states across the country to sabotage our elections.

“Our multi-racial Jewish community has a long legacy of fighting for the freedom to vote, and today our legs are once again praying for an America where everyone’s vote counts. The choice now in front of every senator is clear: Will your legacy be supporting the freedom to vote, or will you side with laws designed to silence the voices of millions of voters across the country? We won’t accept empty promises or platitudes. It’s time to deliver for voting rights.”

“The Freedom to Vote: John R. Lewis Act would restore critical protections against racially discriminatory laws and move us toward a democracy that responds to the needs and priorities of voters. Jewish tradition teaches us that the selection of leaders is not a privilege but a collective responsibility. It is the duty of all who cherish democracy to ensure that all Americans are afforded the opportunity to vote and have their votes counted. The Reform Jewish Movement, long believing that the freedom to vote is fundamental to American democracy, strongly supports legislation that protects the rights of all Americans to exercise their right to vote.”

“A year ago, a record number of voters — led by Black and Brown communities — turned out to elect change. In the days and months since, we have endured unprecedented attacks on our democracy and efforts to suppress the vote. Promised democracy reform legislation has been sidelined, allowing the filibuster of the past to threaten the future of our democracy. And in the meantime, lawmakers in states across the country are making it harder for people of color, those with disabilities, and other vulnerable folks to access the ballot box. We have a moral responsibility as a faith community to ensure everyone has access to the polls. Our nation cannot wait any longer to pass the Freedom to Vote: John R. Lewis Act.”

“Democracy can’t wait. If the Senate does not act to pass the Freedom to Vote: John R. Lewis Act, millions of voters will be left without access to the ballot, particularly black and brown voters. Further, anti-democracy lawmakers in states like Georgia, have passed laws giving unprecedented power over how elections are run and how votes are counted to partisan actors, permitting sabotage of legitimate election results. The Freedom to Vote: John R. Lewis Act will stop these state laws in their tracks. What we do now will shape the course of history. As Jews we know what the slide into autocracy looks like; today we march to demand all senators uphold their oath of office, defend our democracy, and make the rules changes necessary to ensure government by with, and for the people continues to lead our Democratic Republic.”