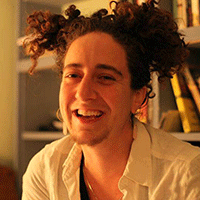 As the Rabbinic Organizing Fellow, Jessica works with Bend the Arc organizers and leaders to explore and articulate progressive Jewish values in our campaigns and bring Jewish history and text tradition to actions and events.

This weekend is Tisha b’Av, considered the saddest day on the Jewish calendar. We mourn the violence and destruction that our communities have survived over many centuries — including the destruction of the Temple, said to have been caused by baseless hatred.

This year, Jewish communities across the country are bringing Tisha b’Av to the streets to mourn the injustice in our time. For what is the injustice of America’s immigration system, if not baseless hatred? Hundreds of us will mark Tisha b’Av at ICE offices, detention centers, state houses, city halls, to say: Eicha/How is this happening? No, we will not stand idly by.

Because we as an American Jewish community continue to recognize that our country is in a state of moral emergency.

Trump’s administration is still cruelly detaining immigrant children and families. His Supreme Court pick is a threat to the rights of women, immigrants, voters, and more. And just this week, Trump revealed once again his disregard for our democracy.

This Tisha b’Av, we can draw upon our own history of grief and our tradition of resistance to make a public declaration against the cruelty of Trump and his administration. Join us.

However you’re marking Tisha b’Av, may you find strength and support in community.