In over 50 cities around the country this weekend, Jews and allies marked Tisha B’Av with the message: immigrants are welcome here and it’s time to close the camps.

We are so proud to have been part of organizing this nationwide action with T’ruah, United We Dream, NCJW, the RAC, J Street, HIAS, Torah Trumps Hate, and the vast network of state and local organizations and synagogues who made this moment possible.

In these times, there is no “business as usual.” We believe we must resist white nationalism and grow Jewish support for communities under attack at every opportunity. This Tisha B'Av we turned our mourning to the streets. Now we’re turning our focus to the High Holidays.

In less than two months, Bend the Arc is mobilizing a growing network of hundreds of leaders to escalate Jewish action for Rosh Hashanah and Yom Kippur — will you donate now to help us keep up the momentum?

Donate $36 to power Jewish organizing during the High Holidays— to train and mobilize hundreds of activists for a huge wave of action to hold Trump’s immigration system accountable. 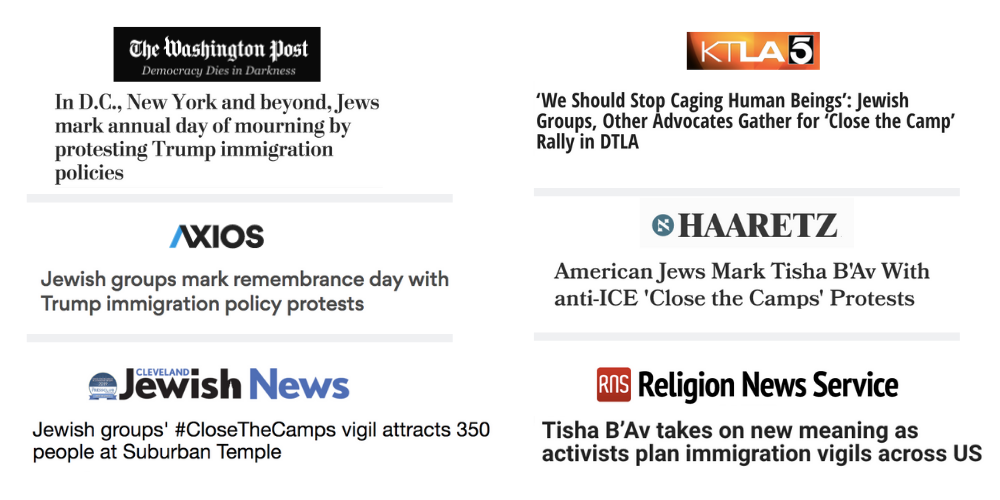 This weekend, Jews and allies from coast to coast sang niggunim (wordless melodies), wore tallit (prayer shawls), read from Lamentations, and blew the shofar to sound the alarm on what’s happening in this country.

The Tisha B’Av actions demonstrate that when we bring our Jewish communities and traditions into the public square, we can grow support for our demands for immigrant justice.

The next major Jewish holidays are the High Holidays — right when Congress will be debating funding levels for the enforcement agencies carrying out Trump’s anti-immigrant agenda.

Our plan at Bend the Arc is to gather Jews across the country to show up in solidarity with our immigrant family, and to demand funding cuts to cruel enforcement agencies. We’ve been preparing for this moment for months, and have already trained over 800 activists.

Donate $36 to Bend the Arc to plan a historic wave of Jewish High Holiday Actions in less than 2 months.

On Sunday in DC, Rabbi Sarah Krinsky from Adas Israel Congregation shared this powerful reminder: our Jewish texts teach us that destruction does not happen overnight. Rather, destruction happens in a series of steps, and we have a chance to intervene at each point along the way.

“Today we say: we will not let one more person’s human rights and dignity be breached.

Today we say: we will not let one more childhood, one more family be destroyed.

Today we say: we will not let the flame of xenophobia, of racism, of white supremacy, or baseless fear burn uncontained.

Today, we heed the warning of our history. Destruction does not happen overnight. So today, we commit to intervene, to act, and to re-write that story.”

We each have a chance to step in, to stop the destruction and the violence, and instead build a world that is grounded in love, rather than senseless hatred.

Thank you for making our Jewish community a place where — together — we intervene, we act, and we re-write the story.

Until justice is real,