Trump campaign doubles down on antisemitic “puppet master” trope
In need of a distraction from COVID failures, Trump uses antisemitic dogwhistles to appeal to the worst elements of the GOP base 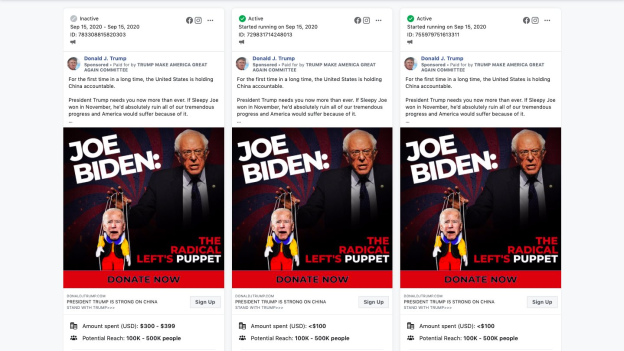 The official Donald J. Trump and “Team Trump” Facebook pages are currently running ads depicting Joe Biden as a puppet controlled by Sen. Bernie Sanders, who is Jewish. In July, the Trump campaign posted a tweet calling Biden “a puppet on strings” and again referencing Sanders. The RNC repeated the trope with a blog entry calling Biden “a puppet of Bernie and the radical left.”

“The Trump campaign usually tries to hide their antisemitic rhetoric behind dogwhistles like ‘globalist’ and ‘dual loyalty,’ but lately they haven’t even bothered to disguise their use of antisemitism to generate fear,” said Stosh Cotler, Chief Executive Officer of Bend the Arc: Jewish Action. “Trump is desperate to revive enthusiasm among his base and distract voters from his abysmal handling of the COVID crisis, and these open appeals to violent white nationalists will only grow louder as he continues to slip in the polls.”

Right-wing regimes have long broken down the fabric of political protest by using the antisemitic notion of rich Jewish financiers as the “puppet masters” of social unrest. During the Russian Revolution, the Tsar’s secret police disseminated the Protocols of the Elders of Zion, a fictional account of a meeting of rich Jews plotting to break down the society of their “host countries” and rule the world through the promotion of social upheaval. For a period, the Protocols did its job to undermine and destabilize the revolution against the Tsar. Because of its success, it’s been translated and promoted by right-wing ideologues around the world ever since.

As Vox noted in 2018, conspiracy theories about Jewish “puppet masters” led to the worst massacre of Jewish Americans in history at the Tree of Life Synagogue in Pittsburgh, as well as a deadly shooting at a synagogue in Poway, California in 2019 and other acts of violence.

But the deadly impact of these antisemitic conspiracy theories hasn’t stopped Trump and his Republican enablers from repeating them in order to divide Americans and undermine social movements which threaten their hold on power. Just this month, the Trump campaign sent out a fundraising letter accusing Jewish billionaires of trying to “rig the election.”