Last night, we won the House — and we are breathing with a sense of relief for the first time in years.

Thank you to everyone who voted, door-knocked, phone banked, texted, donated, and supported in a million small other ways to reach out to over 375,000 voters in competitive districts. You made this hard-won victory possible. We see you and are grateful.

Last night, America’s voters — even through blatant voter suppression and extreme gerrymandering — elected a diverse, historic slate of women, people of color, and LGBTQ candidates to the House who ran on an agenda of inclusion, dignity, and democracy.

We voted while the people of Pittsburgh continue to mourn the 11 Jews slaughtered during the largest antisemitic attack in US history.

We voted while Republican candidates for Congress demonized Muslim people, people of color, and immigrants.

We voted while the President, Republican candidates for Congress, and arms of the Republican party spread racist ads and antisemitic conspiracies on our televisions and radios.

We voted while the President has ordered the military to erect detention camps at the southern border to criminalize asylum seekers fleeing violence, while children have been kidnapped from their parents and kept in tents in the desert.

We voted while the President is attempting to define trans people out of existence.

We voted while a man accused of multiple instances of sexual assault sits on the Supreme Court.

We voted. We voted to defeat white nationalism, and we will continue that urgent fight, starting today.

We voted with tears in our eyes and with the knowledge that the violence perpetrated against our communities in recent weeks is part of a long legacy of violence committed in the name of white supremacy in America. We are bound by our grief to so many others, at the same time we are called to join together to defeat white nationalism.

And despite everything, we voted with hope in our hearts — the hope of an America where we all are safe and protected, and where each one of us can live, love, and thrive. Where out of many, we are one.

For two years we have lived under the tyranny of a president who lost the popular vote by 3 million votes, and a Republican Party that has fully embraced Trump’s nativist, white nationalist agenda. They have governed in cruelty and in bigotry, in lies and in malice.

Now we begin a long process of holding them accountable for the damage they have wrought.

We call on the new incoming Congress to chart a different course for our future while serving as an urgently needed check on this Administration. Starting now. The winners of this election must lead in this moment by telling the whole country that they each denounce white nationalism, before the new Congress is sworn in on January 3. (We’re launching something big next week — spread the word.) 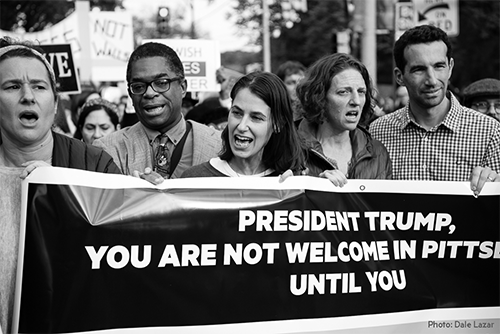 Two years ago, after the 2016 election, our community pledged to stand with all who are threatened — we will never abandon that commitment. As Jews, we know our collective safety can only come in solidarity when those of us in the cross-hairs of danger reach for one another with courage and determination.

We demand nothing less than a nation of safety, freedom, dignity, love, and care for all of us. And together we will win.