We did it! Not only did House Democrats withdraw their original antisemitism resolution, they just released and passed a new version that “encourages all public officials to confront the reality of anti-Semitism, Islamophobia, racism, and other forms of bigotry.”1

This is nearly word-for-word what we laid out in our “People’s Resolution to Reject Antisemitism, Islamophobia, Racism, and Xenophobia.”

Signed by 30 progressive organizations and thousands of progressive Jews and allies, like you, we're hearing that our People’s Resolution and quick lobbying with allies in Congress played a key role in this huge development.

Celebrate this victory with Bend the Arc — make a donation today.

Our narrative is breaking through. This new House resolution, while it came from a painful context, demonstrates that a commitment to fight antisemitism must combat all other systems of oppression.

On Monday, the original House resolution seemed inevitable, but we fought to have all forms of bigotry be addressed together because we saw Republicans using antisemitism as a weapon to divide our communities and single out progressive women of color.

The reason why the House’s original resolution didn’t come to a vote? “House Democrats questioned why their leaders had not moved earlier to condemn President Trump for his own racially charged comments” as well as “bigoted comments by Republicans [that] have gone unchallenged.”2

Instead, the new resolution reads:

White supremacists in the United States have exploited and continue to exploit bigotry and weaponize hate for political gain, targeting traditionally persecuted peoples, including African Americans, Native Americans, and other people of color, Jews, Muslims, Hindus, Sikhs, immigrants, and others with verbal attacks, incitement, and violence.

We helped make that possible, alongside our Jewish, Muslim, and progressive allies. Going forward, the work of Bend the Arc is to keep organizing for an America where all of us are safe and able to thrive — Jewish, Muslim, Black, immigrant, LGBTQ, poor, and differently abled people.

Celebrate this vision with us — make a donation to Bend the Arc today.

You’re receiving this message because we couldn’t have won this without you. You’ve signed the People’s Resolution, the petition “Trump should resign, not Ilhan Omar,” or stood with the Squad to Defund Hate.

We know some people in our community are still processing their feelings and pain over Rep. Omar’s recent comments, while others are feeling pain over the Islamophobia and racism faced by Rep. Omar. We believe we need to make room for everyone’s experience and truth. Bend the Arc is committed to creating spaces where we educate and support everyone in our community to prevent antisemitism from being weaponized — especially leading up to the 2020 presidential election.

Your quick action this week created the vanguard that made this win possible. You are the Jewish resistance to antisemitism *and* Islamophobia, racism, and xenophobia. 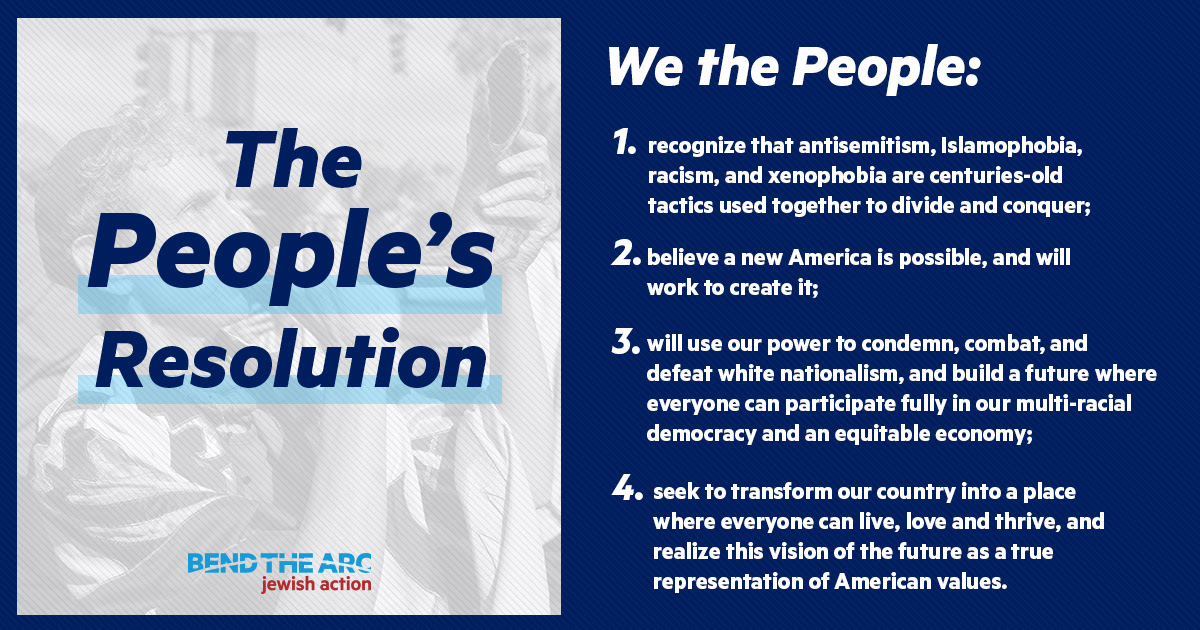