We elected Democrats in 2020 to stop Trump’s cruel immigration policies. Instead, they just gave them even more money.

We’re taking action. Add your name to our petition demanding President Biden cut funding to ICE and CBP in his upcoming budget.

One month ago, a Customs and Border Patrol (CBP) agent in southeastern Arizona shot and killed Carmelo Cruz Marcos, a 32-year-old father of three children.

Seeking refuge in the United States should never be a death sentence, but hundreds of immigrants have been killed by or died in encounters with border patrol agents since 2010. Not one agent has been successfully prosecuted for killing someone while on duty in the nearly 100-year history of CBP.1

Under Trump, the budgets for ICE and CBP grew to new historic highs, funding more violence, family separation, and corruption. But just last week, Congress passed a budget for this year that actually gives more money to these immigration enforcement agencies.2

Trump didn’t invent racist immigration policy, but failing to repair the damage of his policies is an unconscionable failure of leadership from the Democrats who we helped elect to Congress.

We have a chance to make a difference: President Biden is releasing his budget for the next year on March 28 — a reflection of his administration’s top spending priorities and the official start to the next round of budget negotiations.3

Before he does, we’re launching a petition calling on him to cut funding to Trump-level immigration enforcement. You can add your name right now. 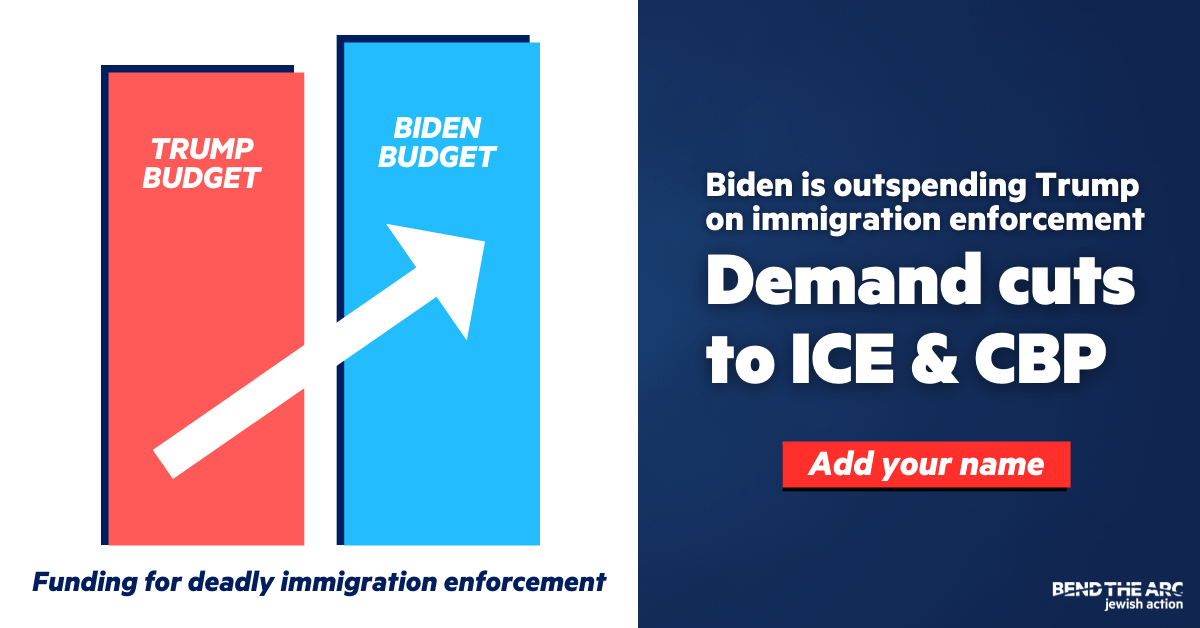 “I want justice,” Cruz’s mother said through tears at a vigil earlier this month. “My heart hurts for what they did to my son. My grandchildren are suffering. My son was going to seek a better life for his children.”4

No one should die or be detained because of where they come from or for crossing a border. We must keep fighting for a country where immigrants are welcome and safe.

Our nation’s budget is not just a reflection of our spending, but of our moral values — and whose lives we value. That’s a teaching that runs deep in our Jewish tradition.

Over and over again our movement protested Steve Bannon and Stephen Miller’s immigration policies, because our communities know the long history of racist, exclusionary treatment of immigrants in this country all too well.

We need to show up with the same energy now as President Biden and Democrats in Congress fail to live up to their promises.5,6,7

Keep an eye on your inbox — after President Biden releases his budget on March 28, we’ll share back how it measures up with our movement’s demands and how we can push him in the right direction.