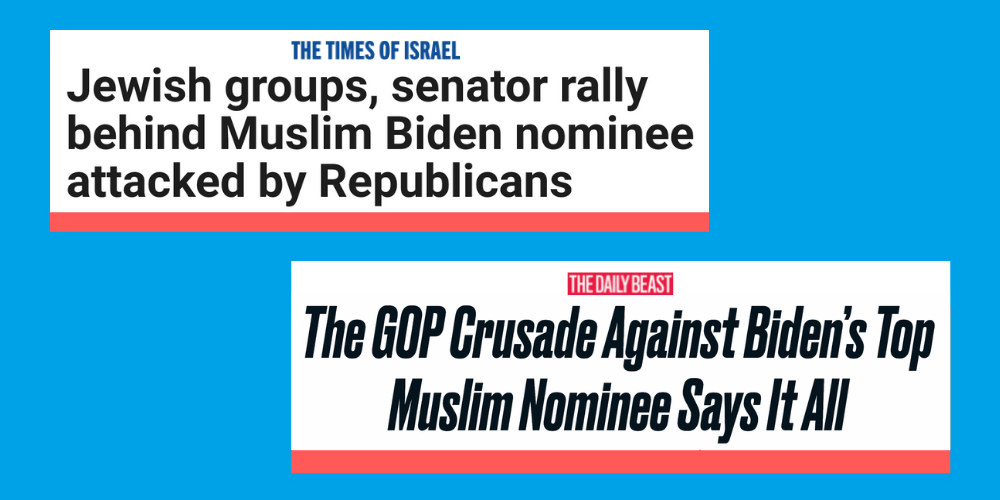 Bend the Arc is helping to expose the Republican playbook of anti-Muslim bigotry. See our national media coverage below and chip in to support this work.

Dilawar Syed is an immigrant and entrepreneur who was nominated in March to be Deputy Administrator of the Small Business Administration — only to encounter Republican Islamophobia and xenophobia.

Bend the Arc mobilized with our Jewish and Muslim partners to call out this bigtory. This weekend, our work was covered in Politico, The Daily Beast, Jewish Telegraphic Agency, Yahoo News, and more.1,2,3

The crass Republican playbook of attacking Muslims, immigrants, and people of color — and claiming to do it in the name of fighting antisemitism — is still very much alive, and we’re beating it back, just like we did in last year’s presidential election.

Every day, Bend the Arc is organizing to reveal the racism central to the GOP playbook and advance multiracial democracy. Donate $18 to fund this critical work.

If confirmed, Dilawar Syed will be the highest ranking Muslim government official in history. But right now, Republicans are blocking Syed’s nomination because of his background and faith — leading to suffering for all Americans, including tens of thousands of minority-owned businesses devastated by the pandemic.

Through our organizing, Jewish institutions representing millions of American Jews spoke out to defend his nomination — including the AJCongress, Anti-Defamation League, National Council of Jewish Women, Union for Reform Judaism, and more. Together, we rose in coalition with national and local multi-faith, community, and civil rights organizations and leaders across the country.

When Republicans used unprecedented tactics to stall Dilawar Syed's nomination, Bend the Arc sprung into action alongside our partners. We'll continue to organize for Syed’s committee vote — and to kick white nationalism, racism, and antisemitism out of the halls of power.

We want you to be part of this fight with us. Donate $18 now to invest in Jewish organizing for multiracial democracy.