On June 20th, hundreds of people joined me at LaGuardia airport to witness separated children being flown from Texas to New York in the dead of night.1,2,3,4,5

At 7:30 pm, I got a text message from a woman on an American Airlines flight, who saw seven young people being transported from Dallas.

At 8:00 pm, I headed to the airport with Cristina Jimenez, co-founder of United We Dream. We saw a few groups of children being hurried into vans. We asked everyone we knew to come. People poured in. They brought signs: “No están solos” (you are not alone) and “Los queremos” (we love you). Millions of people saw video and news coverage of the action. We made visible what had been hidden, while sending a powerful message of solidarity. 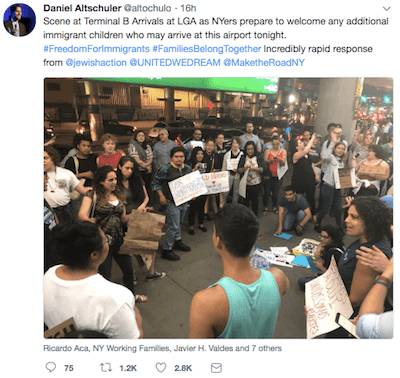 Can you support this work with a donation right now?

At Bend the Arc, we are taking action from coast-to-coast. In NYC, we went last night to bear witness to the cruelty of our government and to send a message of comfort and love to the children who are being flown thousands of miles from their detained parents. In Los Angeles this morning, we organized a faith-based action outside ICE headquarters and are planning additional actions. In the Bay Area, our leaders participated in a training on how to respond to ICE raids. And, we have canvasses this weekend in Denver and Salt Lake City and leadership trainings coming up in Philadelphia and St. Louis.

To everyone protesting, donating, making calls, organizing: thank you.

To the children and their families who have been torn apart: we hear your cries. We won't stop fighting for you.

Our collective outrage is making a difference, and we will continue to fight for freedom for immigrants today and every day.

Please support this work right now with a donation to fight family separation, family detention, and any other cruel implementation of the ‘zero-tolerance’ policy.

PS: Thank you to our friends who joined us at the airport last night — United We Dream, Make the Road NY, Jews for Racial and Economic Justice, MPower Change, Center for Popular Democracy, Working Families Party, and ACLU. If you’re heading to a protest, help bring the message that this is a moral emergency: download the sign. 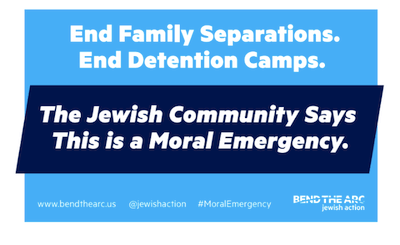