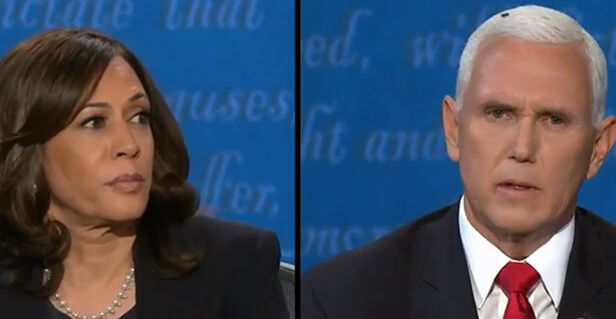 Jewish grandchildren aren’t an excuse for white nationalism. Pence has to go.

The Vice Presidential debate is over, and we have our winner: the fly who parked itself on Mike Pence’s head for nearly two marvelous minutes before ...well, before flying away.

Last night, Pence had the opportunity to show us he's not a giant dog whistle in a clean suit — but instead he chose not to answer when asked why he and Donald Trump cozy up to white nationalists. We can’t let this slippery and dangerous man remain in power.

While the fly triggered snorts and wisecracks everywhere, we know that it will take a lot more than a flyswatter to defeat America’s most dangerous movement: white nationalism. Trump has repeatedly refused to condemn white supremacists. And as we watched VP Pence answer (or rather, avoid) Susan Page’s questions last night, the question on our minds was: what would he have to say about it and how would he defend Trump’s actions?

When pressed on the subject, incredibly, Pence had nothing to say. He tried to excuse Trump’s white nationalism by invoking his Jewish grandchildren — which we all know is no response at all. As commentators noted immediately, someone with close Jewish relatives has even more urgent reason to denounce white supremacy. But from this administration? Nothing.

Pence dodged the question. But Joe Biden and Kamala Harris never have, and never will. They’ll face the danger head on, and push white nationalism out of the halls of power.

In just the last few months, we’ve seen the GOP target their opponents using white nationalist propaganda. In Georgia, Jon Ossoff’s opponent David Purdue ran an ad that arficially enlarged Ossoff’s nose, playing on an age-old antisemitic trope. And nationally, Trump and the Republican National Committee continue to use antisemitic tropes: depicting Biden as a puppet on strings with Bernie Sanders as the puppetmaster, and calling Michael Bloomberg a “globalist.” We know that this is all part of the GOP’s playbook: working to divide and sow fear while they gin up their base.

It’s no wonder Trump and Pence refuse to condemn white nationalism — it’s central to their strategy.

Trump knows he’s losing, and he thinks racist propaganda and the implied threat of violence will keep us from working together to build a coalition that will defeat him next month. But he’s wrong.

There are less than four weeks left: learn about our PAC candidates and how to get involved.

Onward with only 26 days,

P.S. Arielle Gingold, our Deputy Washington Director, was asked by the Biden Campaign to host an event this coming Monday: Standing in Solidarity Against Hate. Arielle and her co-host, Maggie Siddiqi, will be joined by Reza Aslan, Rabbi Sharon Brous, Imam Hassan Jama, Rep. Dean Phillips and other special guests. They will discuss the impact of the white nationalist movement on Jewish and Muslim Americans, our solidarity in the face of hate, and why in this crisis moment we urgently need Joe Biden and Kamala Harris's leadership. We hope that you will join us and be part of the coalition we need to defeat Trump!