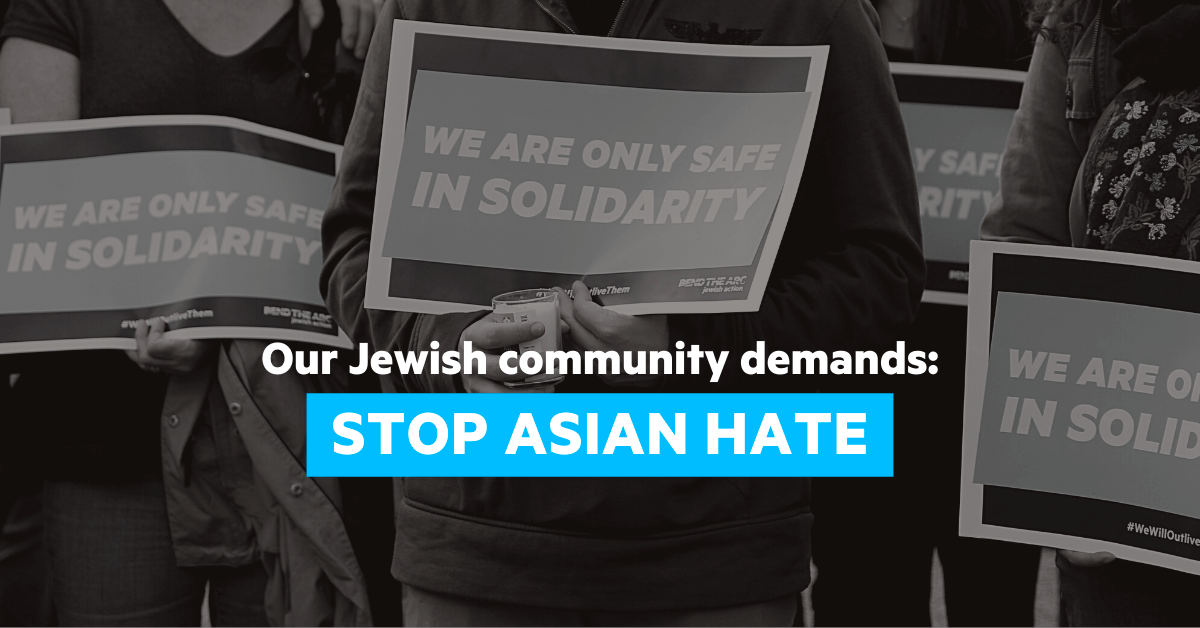 We continue to mourn in the aftermath of another mass shooting, less than a week later. Add your name today to our solidarity letter and rise with us to build a future where we are all safe.

Last week, we put out a call to action to rise with our Asian American family, including AAPI Jews, after the horrifying murders of eight people in the Atlanta Area, including six Asian American women. Over 3,000 members of our community have already signed on.

Yesterday, less than a week later, ten people were murdered in Boulder, Colorado. As we mourn and learn more about the horrific mass shooting in Boulder, we must also continue to show up in solidarity and keep organizing to build a future where we are all safe.

Tomorrow, we will deliver our letter to partners so they know that our community rises together against white supremacy and misogyny — and that they can count on us to help build a country that is truly for all of us. There is still time to sign in support.

“To our Asian family: We love you. We are with you, and we will fight alongside you for a country where all of us are safe.”

In the last few days, we’ve learned shocking new details about the police’s response to the shooting in Georgia:

Sadly, this response isn’t surprising. Our country’s systems are structured to benefit white people and put everyone else in danger. That’s why Bend the Arc is organizing Jewish people across the country to work with our partners and allies to dismantle white supremacist systems.

Throughout our country’s history, those in power have used — and continue to use — fear and division to hold onto power. The people who have spouted anti-Asian rhetoric to distract from their inaction during the pandemic are the same people who promote antisemitic conspiracy theories and attack the movements in defense of Black lives.

As a multiracial Jewish community, we know our safety is in solidarity. As a movement, we will show up again and again to mourn with our neighbors, to repair the damage of the last four years, to fight to dismantle 400 years of institutional racism, and to build a country where all of us are truly safe.

Thank you for rising with us — add your name to Bend the Arc’s letter to our Asian American family before we deliver it to our partners tomorrow.