New York – On Thursday, December 14th, members of Bend the Arc Jewish Action’s New York chapter led a protest of Rep. Lee Zeldin’s fundraiser headlined by Steve Bannon, the chairman of Breitbart and President Trump’s former chief strategist. Rep. Zeldin kept the Manhattan event’s exact location a secret from his constituents, so the protest [video] occurred outside the office of Wayne Berman, one of the hosts of the event. [PHOTOS HERE] 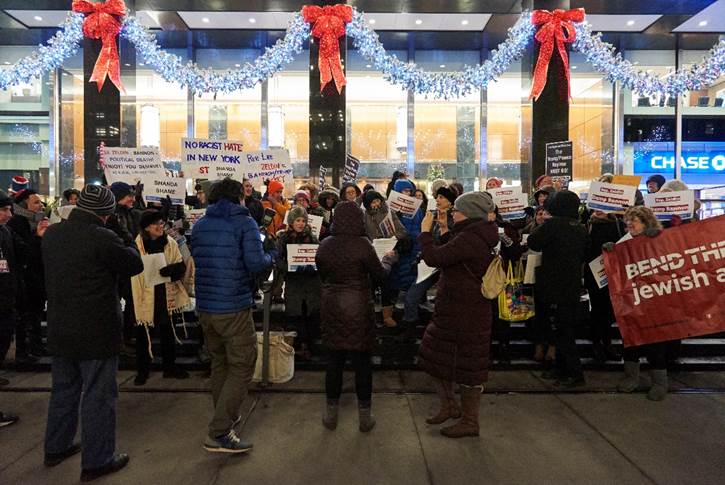 Bend the Arc Jewish Action organizer Kayla Glick said, “As chief strategist to President Trump, Bannon helped develop policies, such as the Muslim Ban, which target and marginalize millions of people in the U.S. That’s why Bend the Arc Jewish Action coordinated protests and petitions that pushed for his removal from the administration. It is deeply disturbing that Rep. Zeldin would ally himself with someone so clearly hostile to our community and our values.”

On Monday, December 11th, Bend the Arc members and other Zeldin constituents presented the Congressman with a petition [video] demanding he back out of the event, citing Bannon’s enabling of white supremacist, antisemitic, anti-Muslim, and other hateful elements. Rep. Zeldin never responded to his constituents and proceeded with the fundraiser.

The petition read, in part: “On December 14, Steve Bannon will headline a re-election fundraiser for Congressman Lee Zeldin of New York. That Bannon’s first fundraiser for a House Republican is for a Jewish Congressman is a shanda (disgrace).”