A direct attack on the only Jewish presidential candidate, in a time of increasing white nationalism and antisemitism 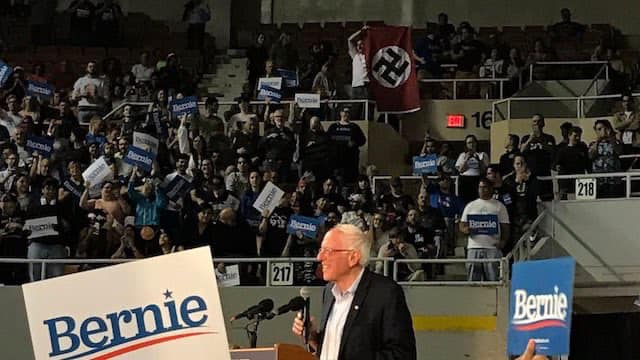 NEW YORK CITY — Bend the Arc: Jewish Action released the following statement on Friday regarding a protester who waved a Nazi flag Thursday night at a Bernie Sanders rally in Arizona:

“Elected officials and the media should strongly condemn this clear, direct antisemitic attack on the only Jewish presidential candidate,” said Bend the Arc: Jewish Action CEO Stosh Cotler. “Sen. Sanders’ family was murdered in the Holocaust. In a time of increasing white nationalism and antisemitism, it matters that his campaign is facing such harassment, and it matters how we respond as a country.”

“This was not an isolated incident — it’s a reflection of how white nationalists are growing in confidence as they have been embraced and emboldened by political leaders in Congress and the White House. It’s the same white nationalism that inspires mass shootings in Pittsburgh, Poway, El Paso, Charleston, Christchurch, and more. It’s the same white nationalism that animates xenophobic policies like immigrant detention camps and the Muslim Ban, and tells progressive women of color to “go back” to where they “belong.”

“That’s why all across the country, Jews and our allies are rising up in solidarity to defeat the white nationalist movement that seeks to destroy us all. We will hold accountable the politicians who embrace and enable them, and build an inclusive, multiracial democracy that is truly for all of us. No matter which candidate you support, we should all be committed to fighting back against white nationalism, white supremacy, antisemitism, and all forms of bigotry.”

In 2020, Bend the Arc is building on its reputation as a leader of the Jewish resistance through the We Rise As One campaign, mobilizing an unprecedented movement of Jews and allies to rise up in solidarity together to defeat white nationalism at the ballot box and hold its champions accountable.