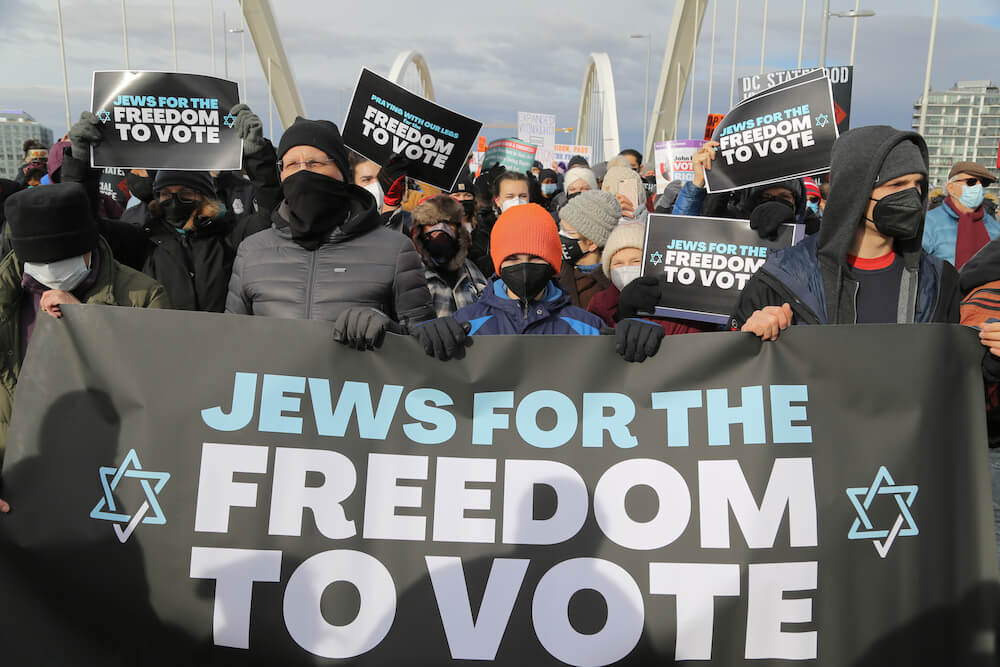 We’re not backing down.
Donate $18 today to support Bend the Arc’s work to secure the freedom to vote for all.

A shanda (disgrace). The Senate finally brought critical voting rights legislation to a vote, but every single Republican senator — with the help of Senators Sinema and Manchin — blocked it from moving forward.

On Monday, I marched alongside the family of Dr. King and hundreds of allies to demand the freedom to vote, just as generations of Jewish activists before me. It was a powerful and painful reminder of our country’s history: people have risked their lives and livelihoods to fight for the right to the ballot, facing suppression and racial terror. We are deeply disappointed today, but we must refuse to be deterred.

Bend the Arc exists so that we as a Jewish community never give up — we rise from setbacks with more clarity, purpose, and power to work alongside our partners to make justice real.

Show our opponents that you won’t back down from bending the arc toward justice. Donate $18 now to fuel our righteous Jewish movement for multiracial democracy.

Our opponents have given us the gift of showing us their strategy: they can’t win fair elections, so they create deliberate barriers to voting and manipulate the rules to enforce minority rule.

In the coming year, we will work to put the future of our democracy on the midterm ballot. For all who believe in freedom, the choice will be clear this November.

Your donation helps power our work to organize the majority of our country to vote for champions of fair and free elections. And we’ll do it alongside a multifaith, multiracial coalition of partners — the same ones who showed up for our Jewish communities after this weekend’s horrific attack on Congregation Beth Israel.

Donate $18 today to power our Jewish movement for a country where we can vote, worship, and live with freedom and safety.

With love and power,
Rabbi Jason Kimelman-Block
Bend the Arc