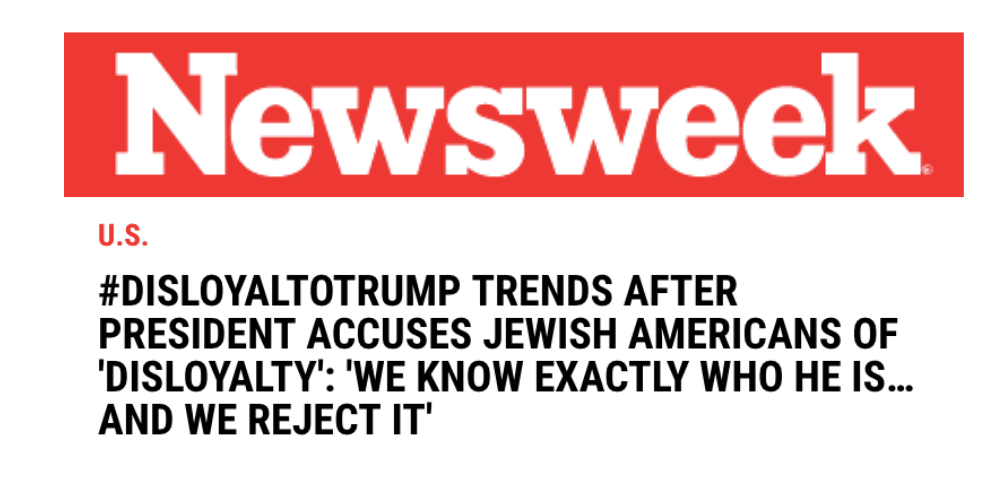 At Bend the Arc, we were horrified by this disgusting attack on our community — but we also knew that we were made for this moment.

We sprang into action, launching a #DisloyalToTrump pledge that’s gathered nearly 8,000 signatures. We worked around the clock to shift the narrative.

Within 24 hours, Newsweek’s headline was a direct quote of our message: “We know exactly who Trump is...and we reject it.”1

Together, we made it crystal clear: Trump doesn’t speak for Jews — we see right through his attempts to divide our communities while putting us all in danger.

We’re building a movement for multiracial democracy to defeat Trump and white nationalism.

Donate $36 now to grow the Jewish resistance to Trump’s agenda.

Your donation trains and equips leaders to resist not just Trump — but an entire white nationalist movement, emboldened and enabled by Republican members of Congress.

This week, Bend the Arc leaders — from Pennsylvania to New York to Illinois — demanded their members of Congress reject Trump’s antisemitism and white nationalism.

In Pittsburgh, PA, Bend the Arc leaders delivered a letter to Senator Pat Toomey. They were ignored by his office — so they launched a petition to all of Pennsylvania and started organizing their community to hold Toomey accountable.

On Long Island, NY, Rep. Lee Zeldin’s office refused to hear from Bend the Arc leaders — he’s one of only two Jewish Republicans in Congress and an ardent supporter of President Trump.

And in Champaign, IL, Jewish community members demonstrated outside Rep. Rodney Davis’ office, calling him out for remaining silent in the face of Trump’s bigotry and attacks on our communities.2

Invest $36 in the Jewish resistance to Trump in communities across the country.

When Trump calls American Jews disloyal, he’s saying we’re not full Americans — the same rhetoric he’s used against immigrants, Muslim Americans, and Black and Latinx communities to stir up his white nationalist base, with no regard to the life and death consequences.

It’s the same white nationalist worldview that animates this administration’s violent anti-immigrant system. This rhetoric of dehumanization and exclusion is at the core of ICE and CBP’s policies.

That’s why we’ve been mobilizing Jews across the country to act in solidarity with immigrant communities and demand an end to ICE and CBP’s immoral practices.

We’ve trained over 800 Jewish activists over the past few months alone — including many of the folks who are holding Trump’s enablers like Zeldin, Toomey, and Davis accountable right now.

We promise we’ll never stop fighting until all of our communities are safe and free — but we need your help to prepare activists in every corner of the country.

Donate $36 to power the growing Jewish movement for justice.

Thank you for being part of the Jewish resistance — we couldn’t do it without you.

Sources:
1. Newsweek, #DisloyalToTrump trends after president accuses Jewish Americans of “disloyalty”: “We know exactly who he is...and we reject it.”
2. The News-Gazette, C-U Jewish Group pushes Davis to condemn Trump over comments