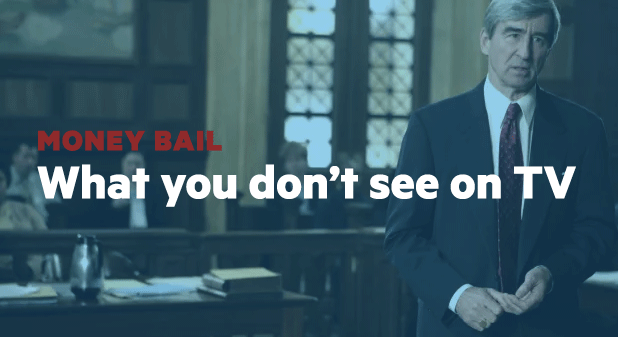 The system of money bail in California is profoundly and profanely unjust, especially for poor people and communities of color. Our Jewish tradition calls on us to challenge injustice wherever it exists. That’s why we need your help to pass SB 10, a new bill to reform money bail in California. But first, here’s what you need to know about money bail.

If you’re a loyal Law & Order fan or guilty-pleasure watch Dog the Bounty Hunter, you’ve probably heard about ‘bail being set.’ But what happens next?

Unfortunately, reality shows and police dramas usually gloss over the destructive impact our money bail system has on countless Americans who are detained pre-trial before they have been found guilty. Here’s the scoop: Under California law, individuals charged with crimes ranging from overdue parking tickets to armed robbery must pay for their pre-trial freedom—from several hundred to hundreds of thousands of dollars.

All too often, Californians facing charges are given a terrible choice: Pay an unaffordable amount of money for their pre-trial freedom or sit in jail for the foreseeable future. Since the median bail amount in California is $50,000, it’s no wonder only one in ten people can afford to pay. In fact, 63% of people currently incarcerated in county jails aren’t convicted of anything—they’re just waiting for their trials to begin. Keeping so many people locked up is expensive, costing taxpayers $5 million every year. And for the people in jail, it can cost a lot more... 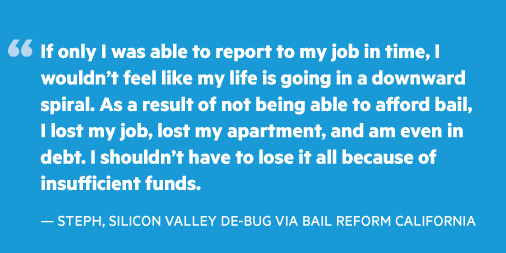 Imagine that one day you’re arrested for something you didn’t do. You suddenly find yourself unable to pick your kids up from school or show up for work for days, weeks, even years. It’s a nightmare too many innocent Californians have had to experience thanks to the unjust money bail system. But, if you have bail money, you can go free before your trial date.

Just a few days in jail without bail can have terrible consequences. People lose jobs, custody of kids, housing, and even their lives. Sandra Bland, found dead in her cell in Texas, and Kalief Browder, who committed suicide in New York, are just two heartbreaking examples of people who died in prison after being unable to pay bail. Out of the approximately 1,000 people who die in county jails every year in the U.S., 80% are still awaiting trial. 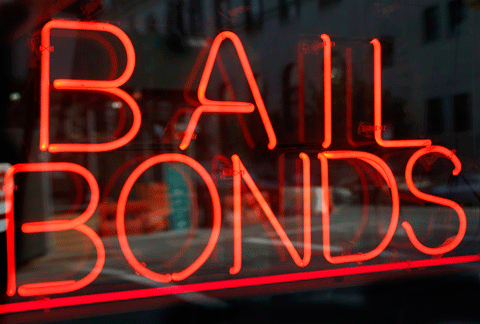 If you can’t afford your bail up-front and don’t want to spend your pre-trial time in jail, you can always take out a bail bond—a high-interest, short term loan used to pay off bail for a substantial extra cost. Predatory bail bondsmen are notorious for charging high fees that you’ll owe even if you're found innocent.

Only the United States and the Philipines attach money to bail. Every other country in the world has alternatives. Money bail forces families deep into debt while racking up profits for bail bond businesses. Today, it’s no surprise that the multi-billion dollar bail bond industry is determined to kill any attempts at bail reform, including SB10.

If you can’t afford to spend time in jail or take out a bail bond, there remains one more option—plead guilty, even if you’re innocent. You might get to come home early to see your friends and family, but the cost can be steep—an undeserved criminal record that will follow you from job application to job application. Prosecutors even lobby judges to set high bail rates as a tool for increasing conviction rates. Research by Human Rights Watch confirms that “many who remain detained because the courts set bail they cannot afford are pressured into pleading guilty — often the fastest way to regain their freedom.” 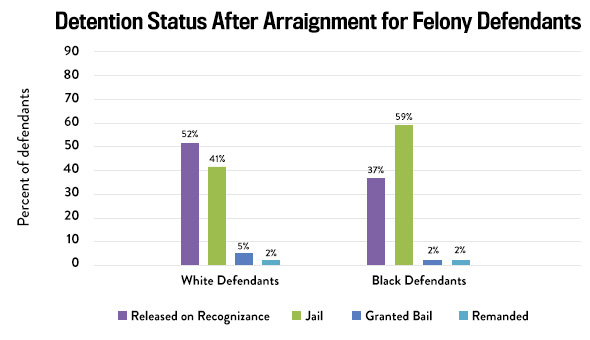 With such dramatic and horrifying disparities, it’s no surprise that the money bail system is a driver of mass incarceration of people of color. 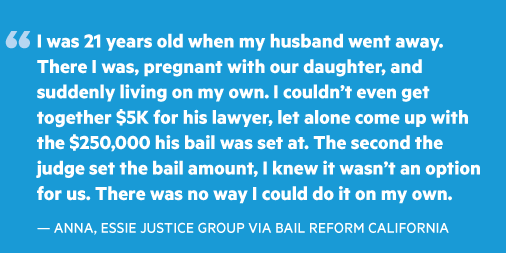 According to Equal Justice Initiative co-founder Phil Telfeyan, the money bail system “effectively creates two different systems of criminal justice, one for the rich and one for the poor.” While poor defendants unable to pay bail remain stuck in prison until their trial date, wealthy defendants are free to meet with lawyers, plan their defense, gather witnesses, and do everything possible to better their odds at acquittal. 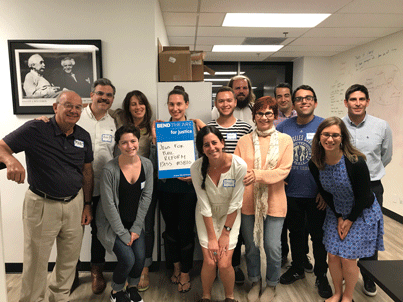 Money bail is an issue that sits at the intersection of mass incarceration, poverty, and the corporate greed of a multi-billion dollar bail bond industry.

American Jews have a long history of questioning the status quo and fighting for a more just and equitable society — from the Civil Rights Movement to the Women’s March. As Bend the Arc leader Erica Hendry writes in the Jewish Journal, “It is time to apply our Jewish traditions of questioning and critical analysis to this unnecessary and discriminatory system that has become so pervasive in our society...Now is the time for us to do what Jews do best– ask why, and then act.” Today, four of our chapters and Moral Minyans in California have taken on money bail reform as their next big campaign. They’ve lobbied lawmakers in Sacramento, organized their communities, and worked with other social justice and civil rights organizations like the ACLU and Ella Baker Center to spread the word about money bail and SB 10.

Bend the Arc supporters across the state, in the Bay Area, Southern California, and San Luis Obispo are organizing to help pass SB 10. In the South Bay, leaders have created a drash for Rabbis in the area around money bail, our Bay Area chapter is organizing a film screening about money bail with the Ella Baker Center and Brave New Films, our San Luis Obispo Moral Minyan is organizing a community wide meeting this weekend to build power and awareness around money bail, and our leaders in the Southern California chapter have participated in and organized six lobby visits with state lawmakers. 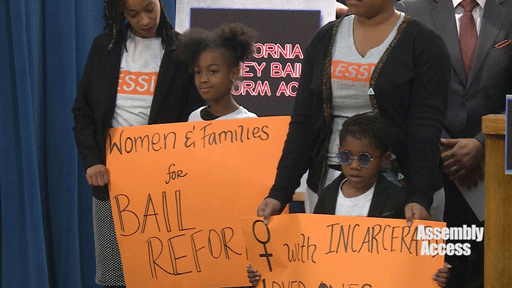 Our current money bail system isn’t just unfair and cruel, it’s also extremely ineffective at keeping Californians safe. Right now, we let people go free before their trial if they happen to be wealthy enough to pay their bail. Under SB 10, pre-trial detention is instead based on whether or not a defendant poses a risk to society.

Plus, bail isn’t the best way to make sure people show up for court. According to Human Rights Watch, “other pre-trial services, like reminder calls, are proven to reduce missed court dates without incurring the costs of locking people in jail.” Kentucky releases 70% of defendants before trial and 90% make all their future court dates. Similar results are found in Washington DC, New Jersey, and other cities and states that have reformed their money bail system. California, on the other hand, has some of the highest defendant flake rates in the country.

9. Meet SB 10, the bill that would reform the bail system 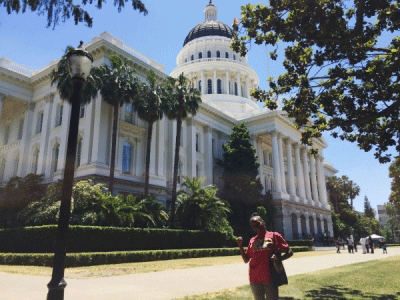 The California Money Bail Reform Act of 2017 (SB 10) will fundamentally restructure and reform California’s cruel, unjust, and immoral money bail system. It will help insure that no one is detained behind bars pre-trial simply for being unable to afford bail. In addition to making our system more fair and equitable, it will save the California taxpayers millions —  our state currently spends $5 million a day on keeping people locked up before their trials.

10. What you can do to make bail reform a reality

As SB 10 moves through the State Assembly, Bend the Arc is calling on our Assembly Members and Governor Brown to support bail reform and fix our broken money bail system.

We need your help to pressure, lobby, and hold our elected officials accountable.

Take Action: Sign our petition to reform money bail in California
and check the box to get connected locally if you’re ready to join local leaders making a difference.