A Civic and Moral Reawakening 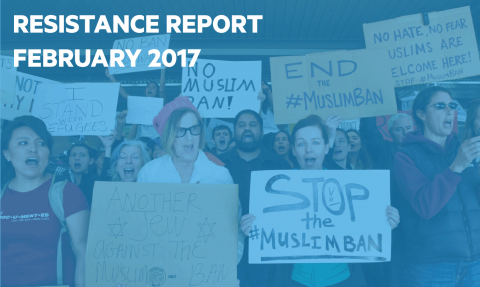 Resistance is not easy.

Change doesn’t come overnight. But if there is one lesson for our community that can be gleaned from the first two months of the Trump Administration it is this — American Jews will not stand idly as President Trump attempts to enact an agenda based on hate, fear and inequality. He will be met in the streets, his actions will be challenged and American Jews will hold ALL lawmakers accountable for any action that infringes on the basic tenets of democracy.

How will he be met in the streets?

The first indication was the historic turnout of the Women’s Marches, held just a day after President Trump’s Inauguration. Across the country, Bend the Arc supporters marched in a dozen cities against Trump’s divisive politics and the threat that he poses to women across the country. You took the message of peaceful resistance literally to the door of the White House, sending a direct message that the President holds no mandate from the American people to govern how he wishes.

When Trump does attempt to enact his hateful agenda, as he did with his sloppy, chaotic and bigoted executive order implementing a Muslim ban, he can expect to see American Jewish resistance from all corners of the country. At airports and city halls nationwide, American Jews gathered with thousands of others to protest Trump’s agenda of hate, and thousands of you called your members of Congress, demanding they go on the record against the unconstitutional executive order. These mass protests and phone calls led to almost immediate concessions, with a stay granted by local courts against those being detained in airports and the White House walking back parts or the order that would affect green card holders.

How will we hold his administration responsible?

Trump can expect that any decision he makes that infringes on civil rights and democracy will be met with both civil and moral outrage.

When Trump nominated Senator Jeff Sessions for the position of Attorney General, a man who holds retrograde views on civil rights, LGBTQ equality, immigration and criminal justice, thousands of you took to your phones to demand that your senator vote against Session’s confirmation.

When Trump appointed white nationalist champion Stephen Bannon to his inner circle, over 29,000 of you signed a joint letter with the Muslim Public Affairs Council, demanding his immediate removal. With new waves of antisemitic activity continuing to hit our community, thousand more of you added your name to demand that Congress support legislation to remove Bannon from his unprecedented seat on the National Security Council — because Congress must check the power of an unelected political strategist who peddles white nationalism and the ‘alt-right’.

And while you continue to work with us on the national level, the Jewish Resistance continues to grow locally. Over 30 leaders have organized community meetings attended by more than 600 people, many in areas where Bend the Arc has never been active before, such as Portland, ME, Kansas City, MO, and Pittsburgh, PA. Hundreds of you attended local town halls during the recent congressional recess, demanding that our progressive leaders continue the fight against Trump administration and challenging our conservative representatives to break their silence as the Trump administration continues to act at odds with the values with which this country was founded upon.

At Bend the Arc, we have been re-energized in our fight thanks to the outpouring of support. The next four years will be difficult in many ways but the path forward could not be more clear. American Jews will be at the forefront of a progressive movement that will seek to take back both house or Congress in 2018 and the White House in 2020. As we build to those crucial moments, we will will work with our partners to fight every repressive aspect of the Trump regime and call media attention to the administration's worst aspects.

Resistance is key. Resistance will demonstrate that attacks upon our liberties will be opposed. We are at the dawn of a civic and moral reawakening and before we know it we will see the sunset of the Trump regime and and its autocratic policies.

Learn more about how you can take action in your community.