A Reflection on Our Year-Long Campaign to Stop Donald Trump 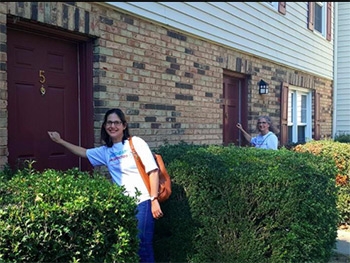 Bend the Arc Jewish Action volunteers canvass in a swing state on October 30.

The result of the Presidential election was a shocking and depressing end to a brutal political season. But as we look for sparks of light to guide us through the difficult times ahead, one source of hope is the incredible strength of Bend the Arc’s community, which stood up against Donald Trump’s campaign of bigotry and hatred with an unprecedented strength and passion.

Ben Murane, the Senior Editor of online publication Jewschool.com had this to say about our efforts: "The election is a week away. And afterwards, many will look back at the results and ask where the Jewish community stood, who rose to the occasion — and who didn’t confront unprecedented, alarming bigotry and anti-Semitism. Only one Jewish organization fully mobilized to defeat the threatening rise of Donald Trump’s candidacy: Bend the Arc.”

For over a year, Bend the Arc Jewish Action drove the leading Jewish response to Donald Trump’s campaign for the presidency. At times, It represented a new level of sustained and strategic effort by the organization and it made the larger political and Jewish community aware of the power of our movement.

While our campaign’s primary goal — the defeat of Donald Trump — was not achieved, nearly all of our other campaign goals were met or exceeded, including our chief narrative goal: making it clear that Jews across the country rejected Trump and his brand of hate. On Election Day we saw the culmination of this year-long effort when 76% of Jewish voters voted against Trump at the ballot box.1

Here are some of the ways we came together to say We’ve Seen This Before:

On June 21, the day of our Vigils Against Violence, supporters  gathered in over 50 cities across the country to protest Trump and his hateful brand of political rhetoric.  The #weveseenthisbefore hashtag on Twitter reached 722,437 people and had over 1.9 million impressions, making it an official “trending topic.” The hashtag spread and has been widely adopted on Twitter as a way of calling out Trump’s most frightening proposals. Its use continues today, with almost 400,000 impressions in the last week.2

Our “Message from Grandma & Grandpa” video was viewed over 1.25 million times and spread a message of older Jews playfully warning their grandchildren that they better not let Trump win. Many who saw the ad then joined our campaign. Ad Age declared it one of the most effective messages of the political cycle.

In September, prior to the start of the High Holidays, we held Book of Life rallies across the nation, affirming the right of all Americans to live free from fear of the political violence that Donald Trump's campaign had unleashed. The images from that event would prove indelible, and are now used by news organizations around the world as the example of “Jewish voters protesting Donald Trump.”

We achieved new levels of press coverage in the Jewish and mainstream press, with dozens of articles and stories in everything from Politico to MSNBC’s Maddow Show to The Forward to local television news in Charlotte, North Carolina.

Our Let My People GOTV voter turnout effort — along with having a direct and measurable impact on the election — put us in direct contact with over 20,000 voters and put our efforts on the map of the progressive movement in a new way. Over 300 volunteers spread out across five battleground states over the course of an October weekend and knocked on over 22,000 doors to encourage support for Hillary Clinton and local progressive candidates. It was the largest Jewish Get Out the Vote operation of the election cycle and our volunteers helped Hillary Clinton win Nevada, along with Catherine Cortez Masto, the first Latina elected to the Senate.

In addition, more than half of our Let My People GOTV participants indicated in a post-event survey that they had never canvassed before, meaning they represented a new group of volunteers that would otherwise not have been activated in the election.

Altogether our message of defiance reached millions and we played a role in a distinctive shift in the Jewish electorate this election. Jews supported Hillary Clinton by a 47 point margin, more than any other religious group (including those of no religion). That margin was 8 points higher than 2012, and Jews were the only religious group to move towards Clinton instead of towards Trump compared with 2012. We have heard from many of you about this campaign and we know that our message and mission resonated deeply with many people, including thousands of people taking action with us for the first time.

The fight against Donald Trump and his divisive form of hate-based politics did not end on November 8th.  Since the election, thousands have signed our Open Letter from American Jews to show solidarity with all those who might be affected Trump’s presidency. Thousands more signed our joint petition with the Muslim Public Affairs Council to demand that Trump rescind his appointment of Stephen Bannon, who openly courts the support of white nationalists and the alt-right.

Sign up today to learn more about how you can take action against Trump and continue the work that we started together a year ago. You can contact us at [email protected] if you have any questions.

Campaign:  Jewish Resistance to Trump  We've Seen This Before