Yesterday, the Congressional Budget Office revealed that 23 million people would lose coverage under the new version of Trumpcare. In Montana, when a reporter asked a Republican candidate for Congress for his comment on that topic, he was physically assaulted. This follows a month where it feels like our basic democratic institutions are under attack every day. How do we respond?

Next week is Shavuot, the holiday that marks when, according to tradition, the Jewish people received the Torah and accepted the commitments and responsibilities to build a just and righteous society. Next week also happens to be when Congress goes home for recess. This convergence is important for us as Jews living in a time when extremist forces seek to transform American society from one that aspires to achieve justice and equality for all, to an authoritarian, white nationalist state, that protects the powerful and has no obligations whatsoever to the elderly, sick and the vulnerable.

Whether or not you eat cheesecake and stay up all night on Shavuot1, I hope you’ll join fellow Jews across America to raise your voice during the May Congressional recess to reject Trump, Republicans in Congress, and their inhumane policies and agenda.

You can find a local resistance event, including town halls, at the new site: ResistanceNearMe.org. Download a Jewish Resistance sign to bring with you here. 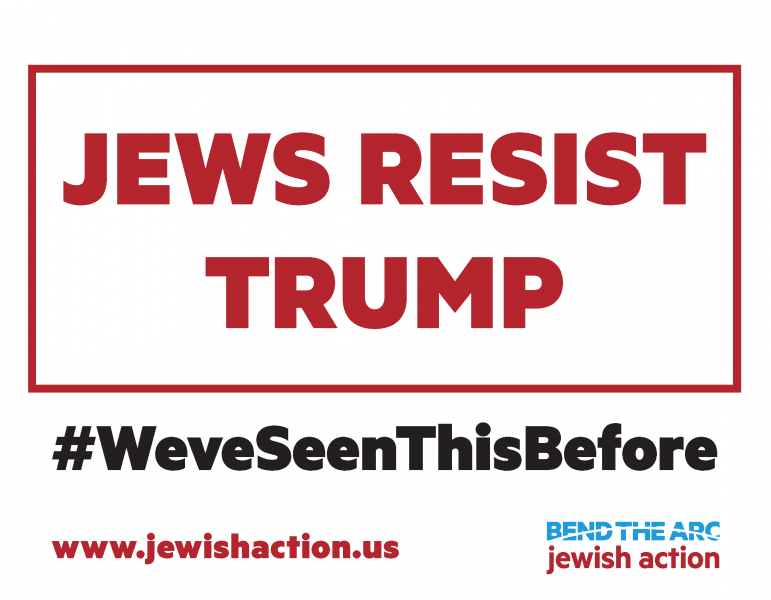 You can also schedule a legislative meeting to talk to your Members of Congress or their staff about Trump’s budget, immigration policy, and the need for an independent commission to investigate Trump. We’ve created a step-by-step toolkit and a guide to current issues to help you organize in-district meetings as part of the Jewish resistance next week and in the coming weeks. Download our toolkit and talking points here.

At Bend the Arc, we’re helping to build a robust Jewish movement for justice that advances the society envisioned by Jewish tradition — and made more urgent by our historical and present experience of rising authoritarianism.

Our elected officials need to know that if they vote with Trump, Jewish progressives will be a part of the movement to replace them. They need to know that we are watching, educating, and mobilizing the resistance.

PS: If you go to an event this recess or plan a legislative meeting, share pictures with us at [email protected] or use the hashtag #WeveSeenThisBefore and we’ll help amplify your good work. Plus, if there’s any support you’d like, email us or find a local Bend the Arc group to partner with.

Sources
1. The Nosher, Why Cheesecake on Shavuot?