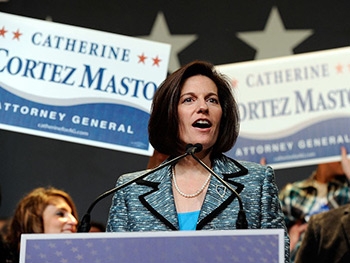 Rep. Catherine Cortez Masto at her acceptance speech on Nov. 9, 2016.

In June 2015, Bend the Arc Jewish Action PAC was launched as the first Jewish PAC that was dedicated exclusively to progressive domestic issues. The PAC launched supporting 12 members of the House of Representatives and over the next year quickly expanded to support candidates in the Senate as well as the Presidential campaign of Hillary Clinton.

The PAC supported candidates whose values reflected the progressive values of Bend the Arc Jewish action and who are champions for the domestic issues that concern us the most: economic justice, racial justice, gender equity, LGBT equality, and immigration reform.

Though it was a difficult election cycle, Bend the Arc Jewish Action PAC is proud of the work we accomplished, the candidates we endorsed, and the community of donors who make our work possible. The PAC raised just under $600,000 for progressive candidates since our launch — that was 20% over our goal!

Here are several bright spots from our work in the election:

As the 2018 election cycle begins to come into focus, there’s a lot to look forward to accomplishing together. Many progressive incumbents will need our help and support to seek re-election next cycle and to stop a reactionary agenda pushed by Donald Trump, Paul Ryan, and Mitch McConnell.

Some of our current endorsees will be looking to run for higher office and will need our support. And many new progressive candidates will look to challenge House Republicans who will have just spent two long years defending the Trump administration and its dangerous agenda.

The work to build a progressive federal government is more important than ever and we look forward to your partnership in turning the tide in 2018.

If you’re not yet a member of Bend the Arc Jewish Action, sign up to receive news and opportunities to make a difference with the PAC.