PHOTOS: Here's What the Jewish Resistance Looked Like in 2019 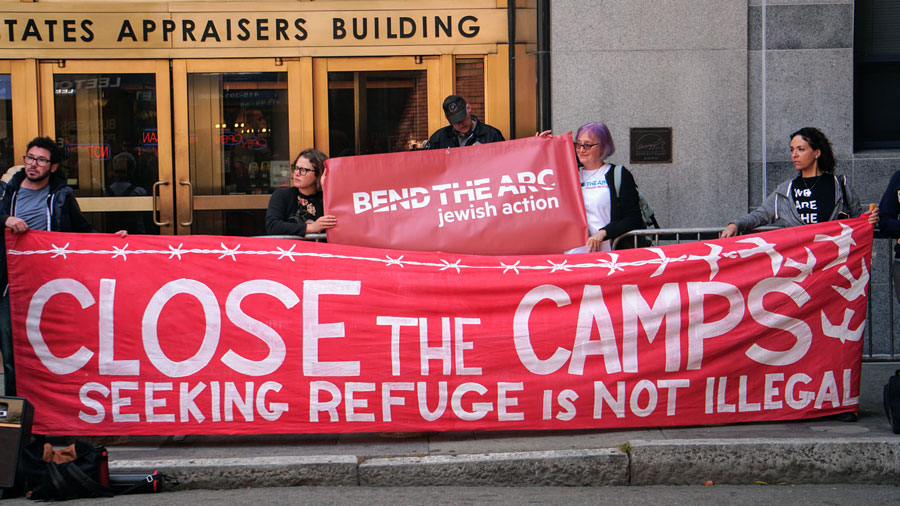 In 2019, Bend the Arc leaders, staff, and supporters like you took on antisemitism, ICE and CBP, Islamophobia, attacks on our democracy, and the growing threat of white nationalism.

We’re so grateful you joined with us this year. Whether you signed a petition, called or emailed your member of Congress, showed up to an action, or donated, you are a crucial part of what makes our movement possible. You are Bend the Arc.

As a Hanukkah present from all of us at Bend the Arc, here are just a few of our most memorable images from the past year. You can make a gift right now to create even more powerful moments of Jewish justice in 2020. 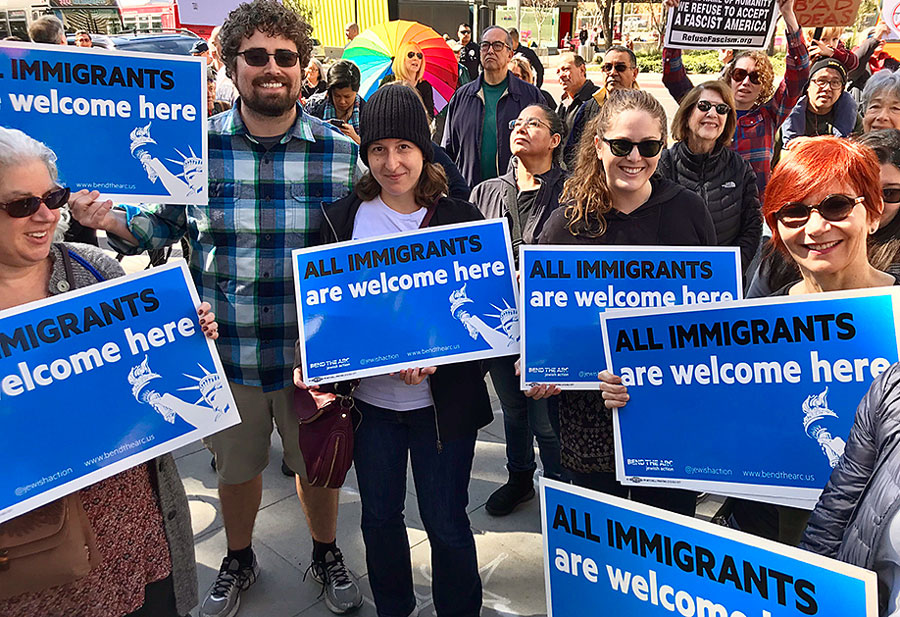 
We began the year celebrating the most diverse House of Representatives ever — one you helped elect. We also began the year fighting the President’s attempts to build his racist wall, from the budget shutdown to his unlawful declaration of a national emergency. From coast to coast, we mobilized to stop his white nationalist agenda. 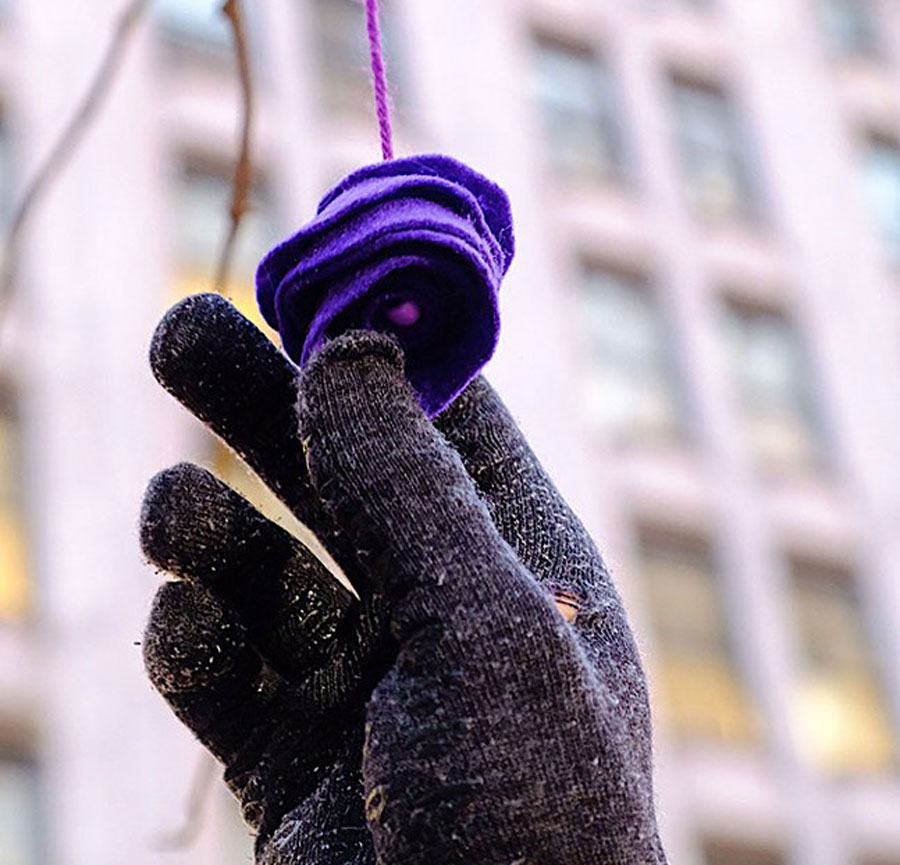 
This March, the trial for the police officer who killed unarmed 17-year-old Antwon Rose II began. Bend the Arc: Pittsburgh leaders decorated trees outside the courthouse with purple roses to show support and love for the Rose family and protest anti-Black racism. The art was inspired by the Jewish stars that non-Jewish Pittsburghers put up all over Squirrel Hill in November in the wake of the Tree of Life shooting.


Purim is a holiday all about Jewish resistance to state oppression. This year, Bend the Arc leaders nationwide honored that tradition by calling on Congress to Defund Hate by cutting funding for ICE and CBP.

Our leaders in Champaign-Urbana, IL spent Purim with Senator Dick Durbin, sharing hamantashen, thanking him for his leadership in combating antisemitism and white nationalism, and urging him to keep showing up for immigrant justice.

All year long, leaders across the country pushed their members of Congress to take a stand against Trump’s rogue immigration agencies. And it's paying off — just this month, 75 Representatives voted against the latest budget for these agencies (way up from 19 earlier in the year). 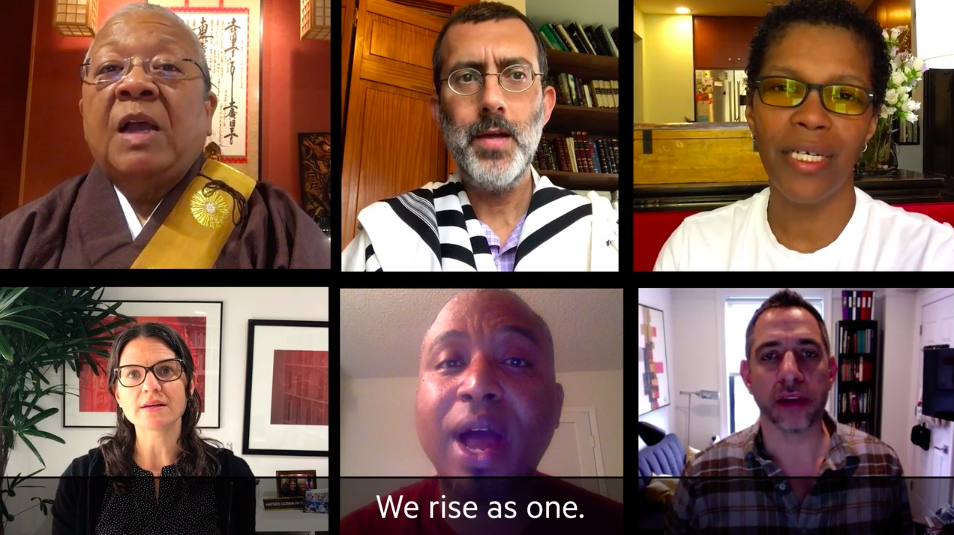 Out of many voices, we rise as one


In April, our community was shaken by another violent antisemitic attack at the Chabad of Poway synagogue. Tragically, the shooter who murdered Lori Gilbert-Kaye (z”l) also claimed responsibility for arson at a nearby mosque.

Listen, America.
Out of many voices,
We rise as one.
We mourn with one voice those lost.
We grieve the white nationalism that threatens us all. 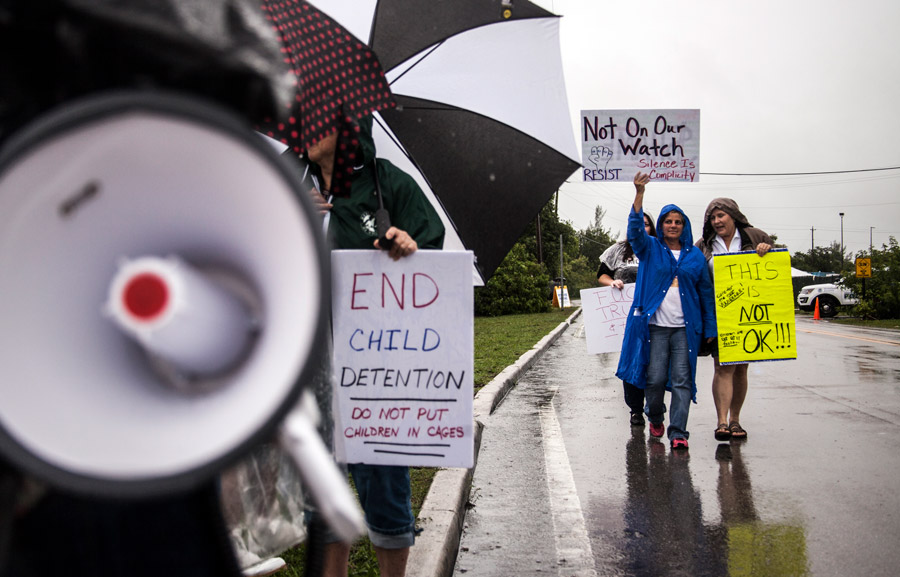 Homes instead — shutting down Homestead


In June, Bend the Arc: South Florida leaders joined with immigrant, interfaith, and Jewish partners to demand the shutdown of Homestead — an overcrowded child detention facility where thousands of migrant children had been detained.

This powerful public pressure campaign gained national attention, leading Democratic presidential candidates to visit and call for its closure — and for Homestead to shutter its doors this year. 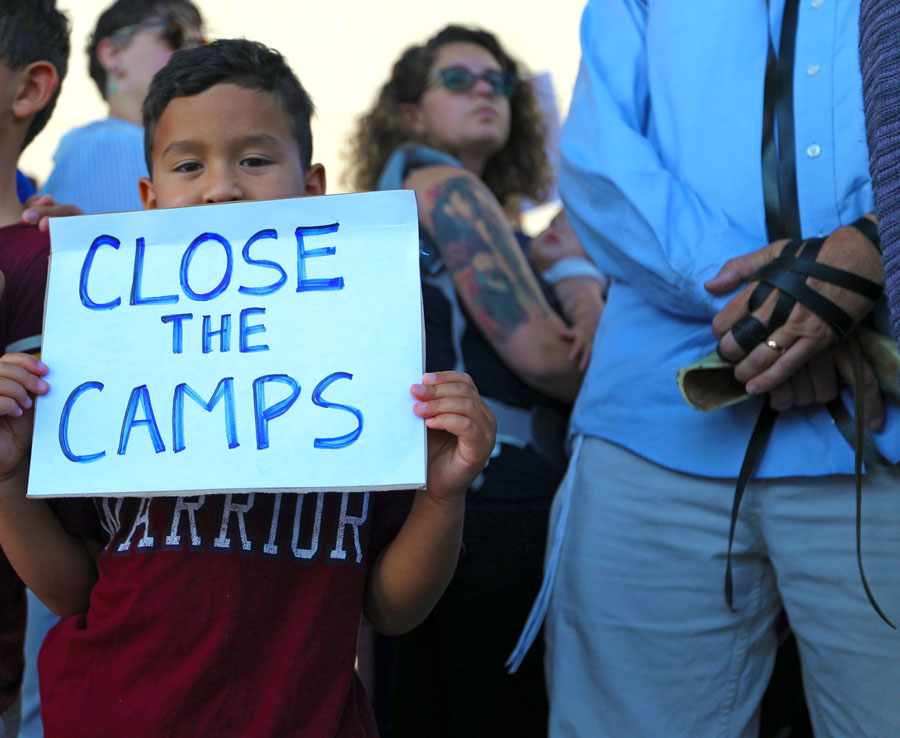 Mourning in the streets


From Raleigh to Chicago, from Philadelphia to Los Angeles, thousands of Jews across the country marked Tisha B’Av, the Jewish day of mourning, with one message: close the camps. Immigrants are welcome here.

It was a beautiful, heartbreaking day, made possible in partnership with our Jewish and non-Jewish partners — T’ruah, United We Dream, NCJW, the RAC, J Street, HIAS, Torah Trumps Hate, and a vast network of state and local organizations and synagogues. 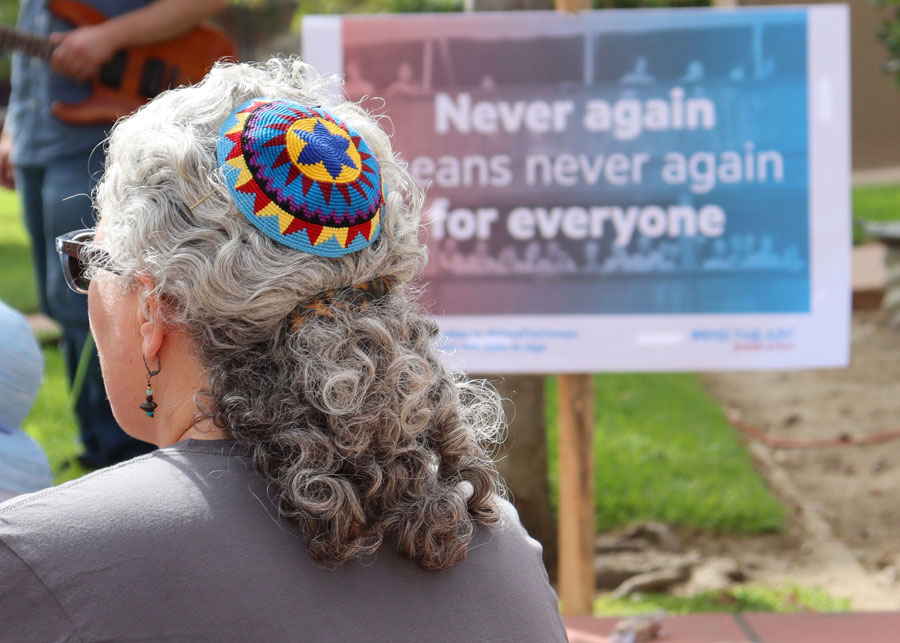 Days of awe and action for immigrant families


Between Rosh Hashanah and Yom Kippur, leaders across the country held 19 events in 17 cities as part of our national campaign to #DefundHate. Together, we sent 3,000 emails to Congress before a funding vote to demand they rein in Trump’s cruel and reckless detention and deportation machine. 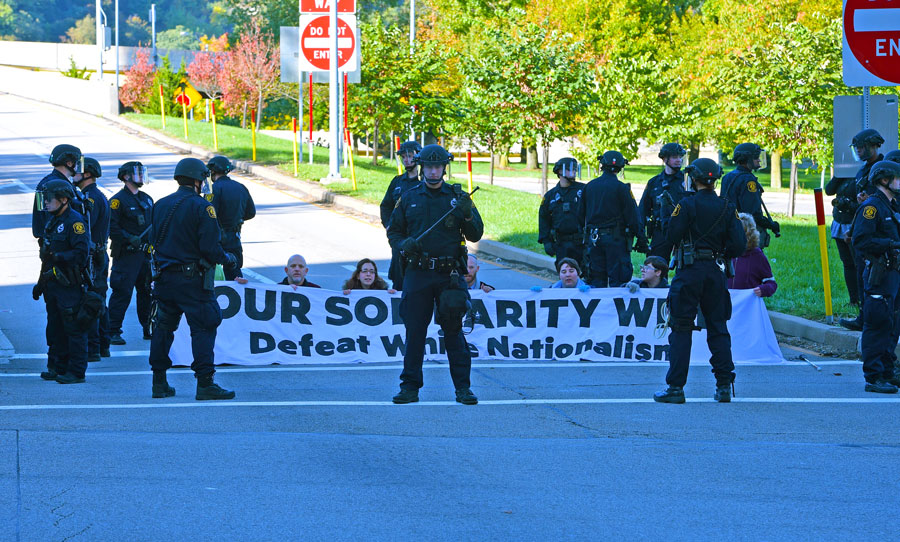 One year after Pittsburgh: our solidarity will defeat white nationalism


When we found out Trump was visiting Pittsburgh, almost a year to the day after the shooting at the Tree of Life synagogue, our leaders sprang into action.

In the morning, 14 Jewish activists were arrested for shutting down a bridge near Trump’s conference — they put their bodies on the line to show that if our leaders won’t act to keep us safe, we will. In the afternoon, eight more of us interrupted Trump during his speech to say “Trump Endangers Jews.” Together, we showed that we haven’t forgotten his role in inciting the worst antisemitic massacre in our country’s history — and we know the way forward is in solidarity.

We know there will be even more work to come in 2020 — and we want you to be a part of it. Make a year-end gift to Bend the Arc today and help us build a country where all of us are safe and free.

Thank you for being part of this powerful community,

the Bend the Arc team 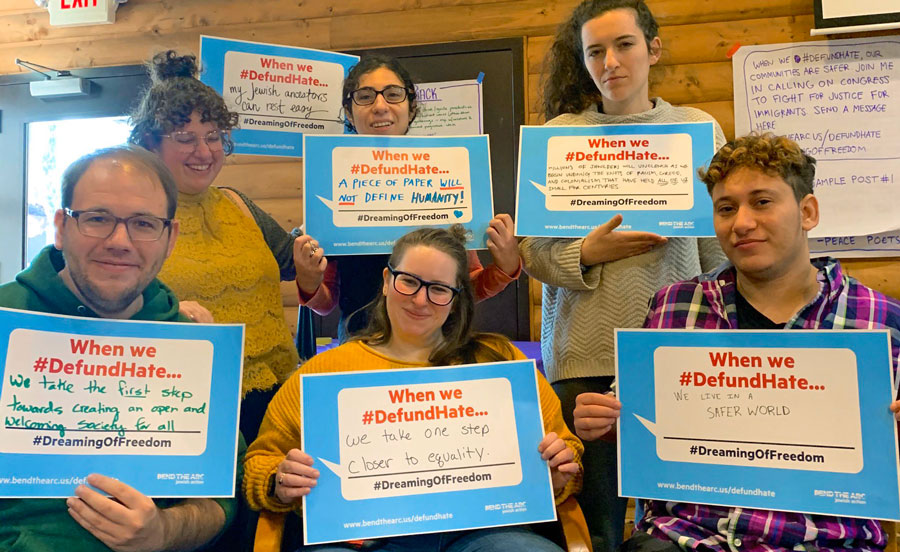