Highlights from Let My People GOTV 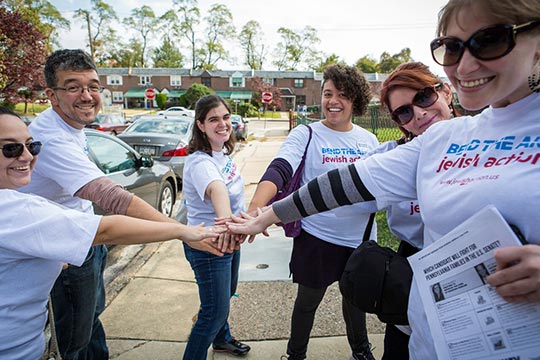 On October 30-31, something incredible happened in this election: hundreds of volunteers traveled with Bend the Arc Jewish Action to knock on more than 22,000 doors in key swing states to help turn out the voters Hillary Clinton needs to win this election.

Volunteers trudged through rain, sleet, and snow (and some good weather, too) to make real our vision of an America rooted in justice, equity and dignity. An America that doesn’t accept an election where immigrants, Muslims, Jews, women, people of color, and people with disabilities become the target for discrimination and hate speech. An America where all are treated with dignity, not only during elections, but every single day by compassionate social policies.

I couldn’t be more proud of the energy and passion that I saw and heard this weekend. From Reno to Raleigh, from Las Vegas to Philadelphia and Miami and points in-between, we are helping to build a movement in this country towards an inclusive, optimistic, and just future.

Read on for highlights from the field, including a surprise cameo!

Let My People GOTV - By the Numbers

By more than 300 volunteers

that will decide the Presidency and control of the Senate: Nevada, Pennsylvania, North Carolina, Florida, and Ohio