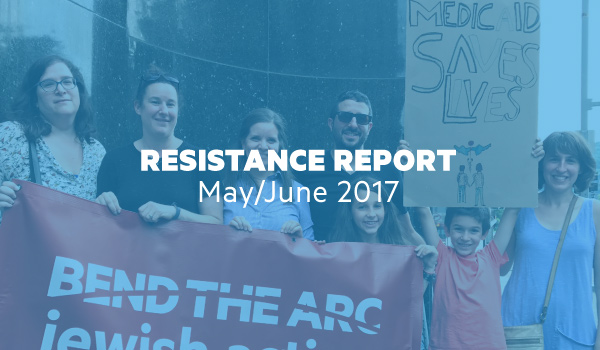 A Note from Our CEO

This past month marked two anniversaries that, in these perilous times, are haunting reminders of our nation’s past, and warning signs for its future.

Fifty-three years ago this month, three Freedom Summer volunteers named Andrew Goodman, Mickey Schwerner, and James Chaney — two white Jews and one black Christian — were murdered by the KKK in Mississippi. Why? Because they believed that everyone has the right to vote and participate fully in American democracy and society.

Also this month, seventy-eight years ago, the U.S. government prevented a ship of refugees from landing in the U.S. The 937 Jewish passengers of the MS St. Louis who were fleeing the Third Reich were forced to return to Europe in 1939, where hundreds of them were murdered in the Holocaust. Why? Because a toxic, xenophobic ‘America First’ ideology pervaded mainstream American life at the time, blinding our nation to what was right and just.

We live in a time when these sinister strains of American thought — white supremacy and xenophobia — are gaining traction and are actively championed by those in power. We see these threats in the discriminatory and unconstitutional Muslim Ban, in the rampant racial and partisan gerrymandering that silences the voices of millions of voters, in the lies the President himself is spreading about nonexistent voter fraud, in the rise of secrecy and authoritarianism, and in press-bashing and corruption. We have seen this before.

As Jews, our history and moral tradition call us to be bold and courageous in the face of these threats. And across the country Bend the Arc leaders are mobilizing our community to respond in solidarity and with determination — whether keeping vigil through the middle of the night fighting for health carein Pittsburgh, marching in counter-protests in the Bay Area against anti-Muslim extremists, or going door to door against long odds in Georgia’s sixthCongressional district.

With Bend the Arc, you’re growing a Jewish movement in every corner of the country to fight back, win concrete progressive victories, and win real power in 2018. Thank you. 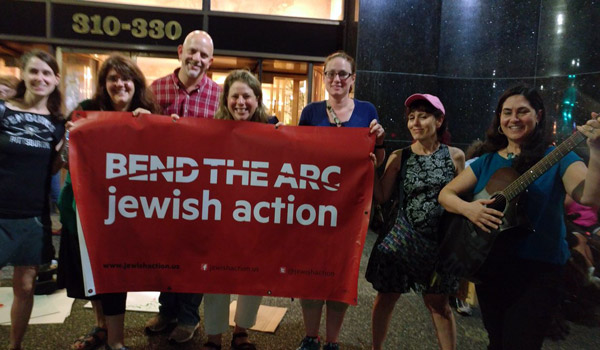 This is what it looks like to grow a movement for the long-term: supporting the leaders who step forward in their communities and giving them the tools they need to fight for change.

Now in more than a dozen cities (and growing), Bend the Arc’s leaders are taking to the streets, organizing in homes, and finding ways to resist the immoral and destructive Trump and Republican agenda. And we’re committed to helping them succeed.

In the days after the election, a few leaders in Pittsburgh felt called to form a local Jewish group to resist, so they formed a Moral Minyan. Now hundreds strong, they’ve undergone an intensive training in community organizing basics, nonviolent civil disobedience, and anti-racism principles. This past week, they put their training to use by helping to organize an emergency 24-hour vigil outside Senator Pat Toomey’s office to pressure him against supporting the Senate’s disastrous health care bill. (And they’re keeping the pressure up this week.)

The stakes for our country couldn’t be higher — it’s going to take all of us to fight back against rising autocracy to achieve our vision of a just and equal America. Thanks to Bend the Arc leaders across the country, we’re making progress. Read their stories and find out how you can get involved below. 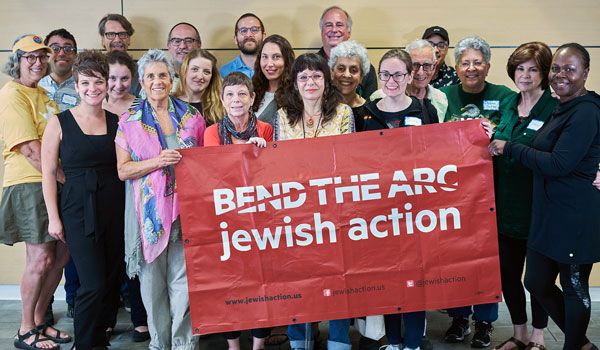 From Los Angeles to Kansas City, and Berkeley to Pittsburgh, more than a hundred Jewish activists young and old have completed extensive, two-day trainings in growing the Jewish resistance.

These new communities of volunteer leaders studied community organizing skills, learned skills for nonviolent direct action and civil disobedience, strengthened relationships for the long fight ahead, and discussed how to build more racially inclusive groups and stronger coalitions. Attendees are already putting their new skills into practice and organizing their communities to show up in fights for justice.

Grassroots leaders of Bend the Arc’s New York Chapter also recently participated in the second of our trainings in the Long Island area, focused on ways to fight racism and antisemitism.

We’re not planning to slow down anytime soon. Bend the Arc will continue expanding our training program as new groups of activists form more Moral Minyans across the country. 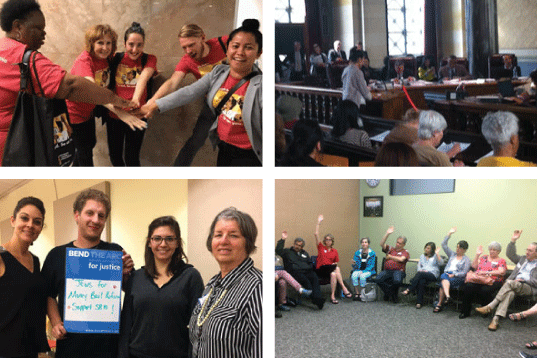 The Resistance is Local, and It’s Making Progress

In the era of Trump, we’re proving that we can still advance progressive change locally.

Just two months ago, Bend the Arc leaders in Los Angeles and New York helped pass measures to end homelessness and end the prosecution of 16- and 17- year olds as adults. Now, leaders are joining new campaigns and continuing to elevate what a progressive vision in criminal justice, immigration, and housing looks like for the rest of the nation:

Southern California — Leaders are making a big impact by showing that no committee hearing is too small to be a target in the fight to make Los Angeles an affordable city to live in, packing City Council in favor of affordable housing policies.

Bay Area — In June, California got one step closer to becoming a sanctuary state where immigrants are safe to live and work, regardless of their immigration status — and leaders have been phone banking and traveling to Sacramento to lobby to build support for a key bill.

New York — The members of our New York Chapter unanimously voted on their next issue campaign: making New York safer for immigrant communities. All New Yorkers, regardless of immigration status, deserve to live and work without fear of deportation.

Southern California, Bay Area, South Bay, San Luis Obispo — Up and down California, the decision by Bend the Arc leaders was unanimous: we need to end the money bail system. More than 60% of people in jails in California are behind bars because they can’t afford bail as they await trial, while many others are forced into debt (even if proven innocent). While this shameful injustice gets little attention, it has hugely destructive ramifications for the lives of people who encounter it, and it’s time we make it an issue the Jewish community is fighting to change. Stay tuned for ways to plug in. 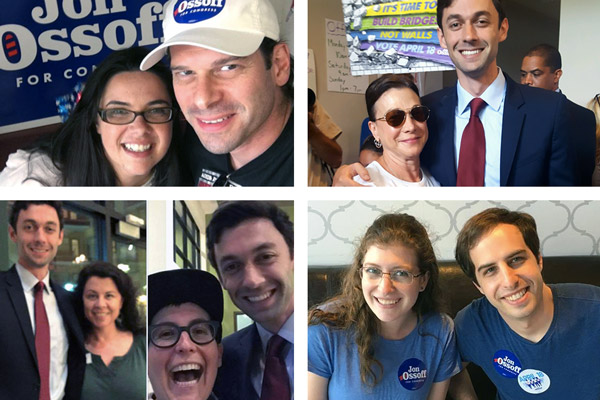 While Jon Ossoff didn’t win the race for the seat in Georgia’s Sixth Congressional District, by coming within a few points of winning a deeply red seat he showed that our movement is getting stronger.

The donors of Bend the Arc Jewish Action PAC supported his campaign and the leaders of Bend the Arc’s Moral Minyan in Atlanta poured their energy into this race since the seat opened, with dozens of supporters putting in more than 200 volunteer hours across the district. We know that the connections they made at the local level — door-to-door, neighbor-to-neighbor — will outlast this special election, and set the stage for the transformation our communities and our nation need right now.

The Atlanta Moral Minyan leaders are an example to us all of the strategy, courage and chutzpah of the Jewish resistance. In recognition of their work, hundreds of fellow Bend the Arc supporters are sending them messages of thanks and solidarity:

Your work did not go unnoticed. For those of us out of state, thank you.
—Diane, Washington

Keep up the good fight. We are MAKING GAINS, day by day. You are heroes!
—Susan, California

Add your message of thanks and solidarity here. 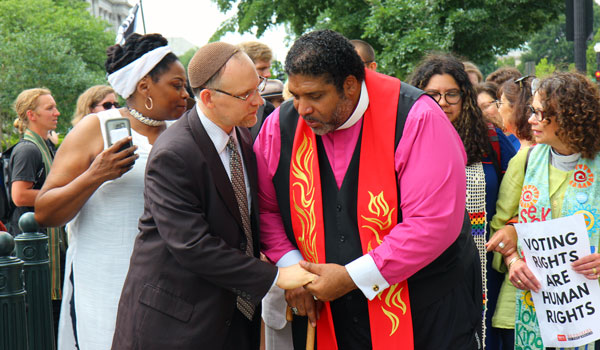 An increase in hate crimes and attacks on Muslim people... Under-the-radar ICE raids that continue tearing families apart... The return of mass incarceration policies and the so-called War on Drugs... the regressive agenda and unsafe climate created by the Trump Administration are an assault on people of color, immigrants and Muslims.

And across the country, Bend the Arc is mobilizing in solidarity to fight back: from joining counter protests against far-right hate groups holding anti-Muslim rallies, to a crowdfunding effort that raised $10,000 to help a Muslim civil rights leader stay safe from violent threats.

In Washington, D.C. our Director of Bend the Arc Jewish Action, Rabbi Jason Kimelman-Block, marched with Reverend Dr. William Barber and other faith leaders from the Supreme Court to the Capitol in protest of racist voter suppression and criminal justice discrimination. In Richmond, Virginia, Rabbi Michael Knopf spoke outside the 4th US Circuit Court of Appeals as they heard oral arguments on the Muslim Ban.

And on May 1, hundreds of Bend the Arc supporters joined rallies and marches in solidarity with threatened immigrants, from New York to San Luis Obispo (where our new SLO Moral Minyan took the lead in planning the local march).

Writings from the Resistance

“The very principle of voting rights is under attack.”

“This is not the time for standing idly by.”

“Since the 2016 election, Bend the Arc has served as a central place in the Jewish community for those who have been awakened by recent political events and are seeking opportunities to make a difference.” 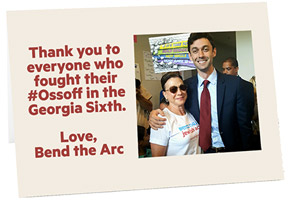 We’re sending a thank you card to leaders in Atlanta who fought hard to try to win a congressional seat in Georgia. Add your name. 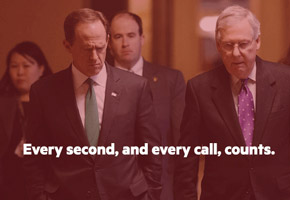