Resistance: Responding Boldly to the Election with Solidarity 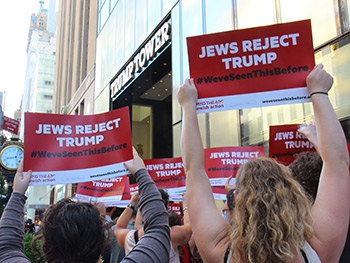 The day after the election, Bend the Arc Jewish Action CEO Stosh Cotler released a statement that said, in part, “We consider Trump’s vision of the country to be fundamentally un-American, and American Jews will protest and resist these plans with passion and courage.”

In the weeks since, more than 65,000 American Jews, Muslims and allies, have joined together with Bend the Arc Jewish Action to resist the normalization of the President-elect and to act in solidarity with other communities under threat.

Donald Trump’s election has unleashed an unprecedented wave of hatred. In the last few weeks, the Southern Poverty Law Center has documented 900 incidents of harassment across the country aimed at Muslims, Jews, and people of color. Neo-Nazis gathered in Washington, D.C. to celebrate their victory. President-Elect Trump has hired Stephen Bannon, a purveyor of white nationalism and antisemitism, as his senior advisor and named civil rights opponents like Jeff Sessions to his cabinet.

In response, tens of thousands of American Jews signed our open letter to the millions of immigrants, Muslims, people of color, LGBT people, women, people with disabilities, and everyone who is threatened by the President-Elect and his administration to say, “We are with you now. And we will be with you every day for the next four years.” This powerful message of solidarity cut through the noise and reached millions of people online.

Building on this pledge, we launched a joint petition with our allies at the Muslim Public Affairs Council demanding that Trump fire Stephen Bannon and not hire any white nationalists in the White House. Before Thanksgiving, we delivered more than 27,000 signatures from Jews and Muslims to the Trump transition team. Standing outside the transition team office in Washington, D.C., Deputy Director of Bend the Arc Jewish Action Arielle Gingold said, “We are going to keep fighting together. We are going to show that we are united and there is far more that unites us than divides us.”

Bend the Arc staff and leaders are currently planning the next steps in what will be a sustained campaign to stand with threatened communities and prevent President-elect Trump from enacting an agenda that threatens anyone’s civil liberties, democratic institutions, the safety net, or mass deportations. Join the campaign by signing our open letter, our joint petition, or by contacting us at [email protected].

Campaign: Jewish Resistance to Trump  We've Seen This Before