If you’ve seen the video, you know that Bend the Arc organized an action at the Capitol this week where 86 rabbis and leaders representing 18 Jewish organizations — including the Religious Action Center — were arrested for civil disobedience for a Dream Act.

After the action, we met with Dreamers and their words are still reverberating in my heart. They wanted to understand better what had compelled our solidarity. With tears running down their faces, Reyna, Antonio, German, Karla, Cynthia and Margalito asked, “Why would you do this for us?”

1. We believe in deep partnership with Dreamers and immigrants

I want to first express my gratitude for our partners at the Fair Immigration Reform Movement of the Center for Community Change, United We Dream, and CASA.

We have been following their courageous leadership to determine how we can most effectively advocate for a clean Dream Act — who are the Members of Congress that need to hear from us, how do we counteract immigration-related lies and bigotry, what can we do as allies to show up?

During the civil disobedience, hundreds of Dreamers from these organizations joined us to cheer and sing and chant “Dream Act Now.” As my colleague, Rabbi Jason Kimelman Block shouted back, “Dreamers, we love you! We will fight for you and for your parents.” 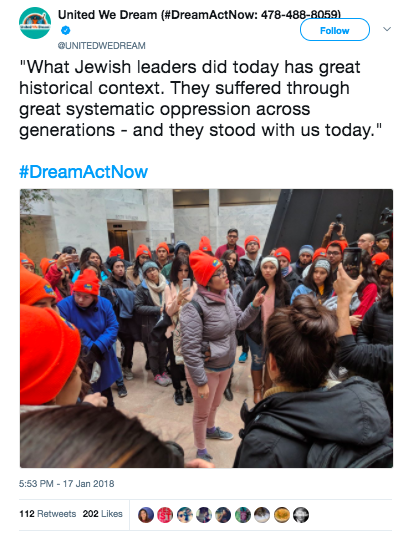 2. Putting our bodies on the line is how we liberate all of us.

No one should ever feel as alone and terrified as Dreamers do under Trump.

We believe that our struggles for justice are inextricably linked. The only way to achieve our vision of equity and liberation for all is for each of us to use our moral compass and take action whenever anyone is mistreated or experiencing cruelty and harm.

This week we modeled the transformed country we’re trying to build by putting our bodies on the line for a clean Dream Act, and inspiring Jewish demands of Congress across the country. 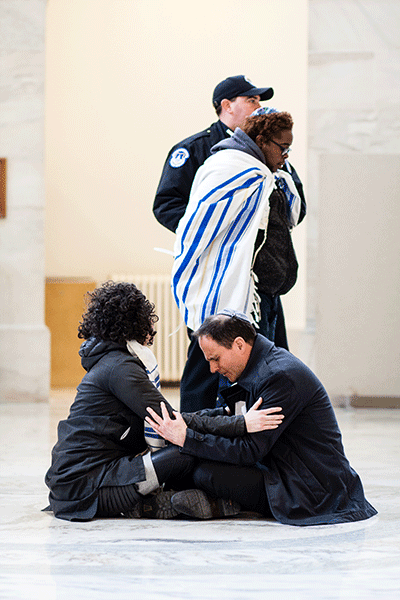 Koach Frazier is arrested as Stosh Cotler and Rabbi Jonah Pesner of the Religious Action Center continue to sing at the end of the action.

3. The Dream Act fight is part of something bigger.

It’s not acceptable to have an openly and unapologetically racist president who is stoking white nationalism. We know our work to help pass the Dream Act is part of a larger struggle.

While xenophobia and racism are nothing new in our country, the bigotry and violence that is being emboldened right now at the highest levels of our government is something that we, as the Jewish community, must disrupt and do everything we can to prevent further harm. 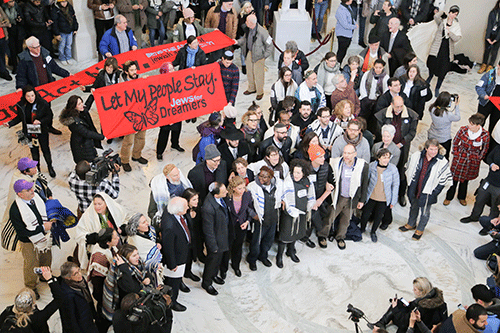 4. Our visionary opposition was seen by millions.

MSNBC interrupted their programming to show our action live, saying “What you're getting here is an effort at civil disobedience to remind lawmakers how important this is to people who want to see [the Dream Act] … and they're going to sit here and fight for it.”

Whoopi Goldberg interrupted her interview with Senator Dick Durbin on The View to let her audience know that 100 rabbis and Jewish leaders were marching into the Capitol rotunda to demand a Dream Act.

Over a million people watched the action unfold live with us on Facebook, including on livestreams by Senator Bernie Sanders and Buzzfeed News. That evening, we were included in the lead stories on the NBC and PBS nightly news. Our action was also covered by ABC News, CBS News, Channel 4, Daily Beast, Catholic News, Haaretz, Huffington Post, Jewish Journal, JTA, Telemundo, and multiple local news stations.

Through these channels, our prophetic call reached millions of Americans in every corner of the country — including our Members of Congress ahead of today’s critical vote. 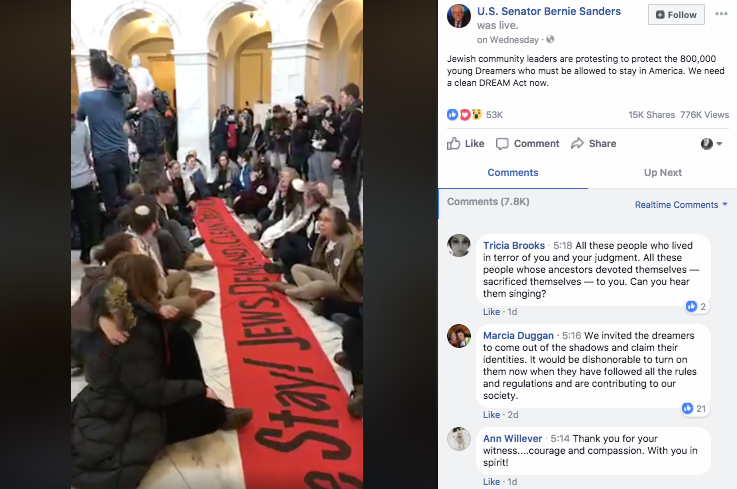 5. Our movement is multiracial, cross-denominational, and intergenerational.

Our youngest participant arrested for civil disobedience was just 18 years old. Our oldest just turned 78 — she was arrested on her birthday. Dozens of rabbis representing reconstructionist, reform, conservative, and orthodox communities participated. Leaders travelled across the country to join us.

Whoever you are, there is space for you, and a place for you, in the Jewish Resistance. It’s your support, participation, and love that make this Jewish movement powerful — we can’t wait to do even more together.

6. We are inspiring Jewish Resistance across the country.

After being released I was moved to tears by the number of people telling me, “Thank you for doing this. This is my Judaism.”

We unleashed the power of our prophetic tradition in the Capitol this week by rooting our action in both thousands of years of meaning and the urgency of this political moment. This is how we build visionary movements that break open people’s hearts, and support them to tap into the courage within themselves to take action for our collective liberation. 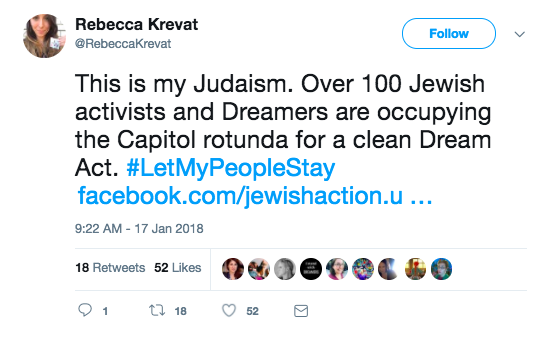 For what comes next, we need you: take action.

To anyone inspired by our action: at Bend the Arc, you can be part of a community of meaning that is joyously making effective change.

We are a home where you can channel your yearning to build a more just and equal nation. This is a moment where each of us can, and must, find out what our contribution will be. There are many ways to get involved, learn more at jewishaction.us/resistance.

There’s so much more to say but for now I just want to thank you for joining us on this journey.

We are watching the vote in the Senate today and will let you know what next steps you can take to raise your voice for the Dream Act. Keep an eye on your email and continue to call your Members of Congress at 1-888-778-6856. 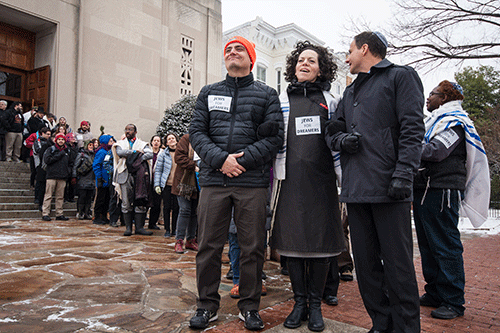 Gustavo Andrade from United We Dream, Stosh Cotler from Bend the Arc, Rabbi Jonah Pesner from the Religious Action Center of Reform Judaism

Also supporting the action were immigrant-led movement organizations such as the Fair Immigration Reform Movement of the Center for Community Change, United We Dream, and CASA.