Last week during the High Holidays, Jews and allies blasted the shofar at rallies outside the offices of Congressmen enabling Trump’s immoral agenda. This is our campaign to Turn Congress 180.

In Illinois, where Rep. Rodney Davis votes in line with Trump's positions over 95% of the time, Bend the Arc leaders went to his office in Champaign to confront him and deliver their petition in support of the Dream Act.

The local news was there to capture the whole thing. My favorite quote is from Terry, who said, "The thought that somebody would use somebody like my father [who came to America when he was 5] as a political bargaining chip for some kind of enhanced border security sickens me. This is personal.”

We know that most Jewish American immigration stories would not be possible at all under today’s immigration laws. And we can’t be silent now as Trump and Congress support policies that leave millions of undocumented immigrants in America in terror.

In New York, where Rep. John Faso votes in line with Trump's positions nearly 90% of the time, local leaders in the Hudson Valley went to his office to demand he choose a side: with or against white supremacy.

At the shofar blast in New York, Allen, a Dreamer, shared this: "It's painful. I want to wake up one day and not worry about racism, not worry about being deported. I'm here and feel empowered by you guys — but it's very hard for us. 800,000 people are going through the same thing I am. We don't want to be a bargaining chip for the wall. I've been here 25 years, and all I need is a piece of paper."

The local activists livestreamed the whole action, and we made a post with the top moments.

Watch and share: Jews and allies blast the shofar to make Rep. John Faso choose a side.

This is Turn Congress 180 — Bend the Arc’s new campaign run by local volunteers, demanding their Representative choose a side: they can either continue enabling Trump’s immoral agenda, or they can stand up for all the people who feel threatened, scared, and are in hiding because of Trump and Congress.

Want to learn more? Join one of two calls I’m hosting to help you bring the Jewish Resistance to your community — especially if you're near one of the districts in the map below — Thursday, September 28th, at 6:30pm ET or Friday, September 29th, at 11:30am ET. 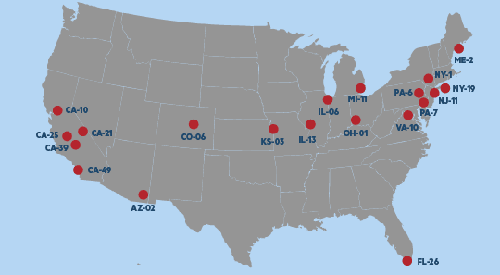