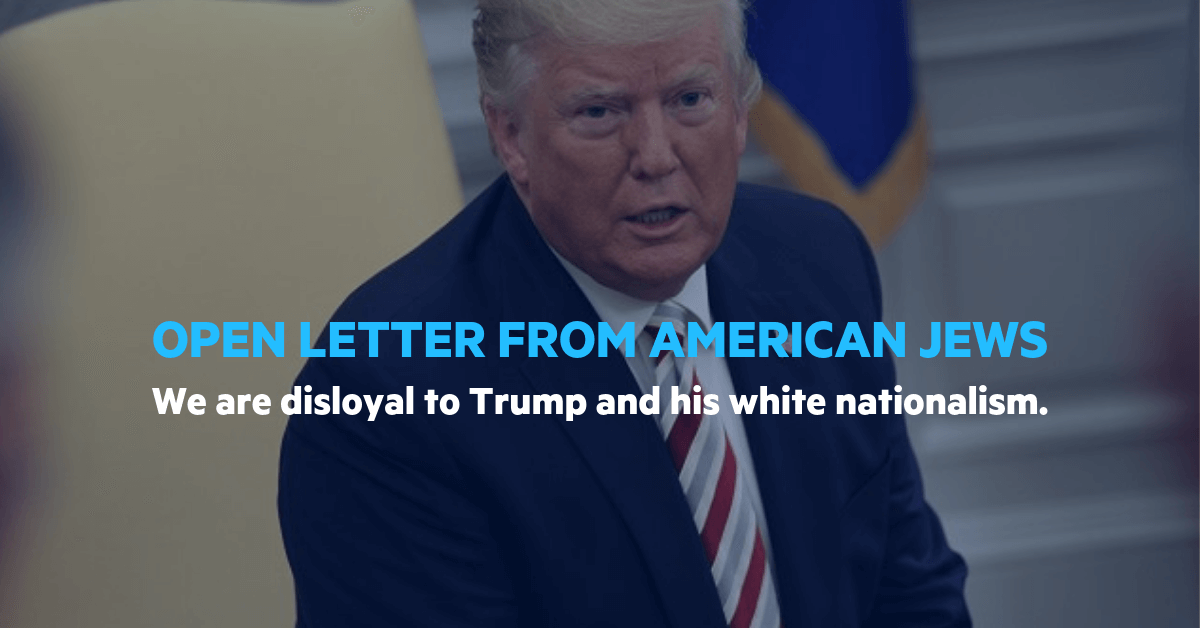 Yesterday Trump said "I think Jewish people that vote for a Democrat — I think it shows either a total lack of knowledge or great disloyalty."1

We’ve been getting messages from Jewish people across the country, enraged that Trump used a centuries-old antisemitic trope designed to isolate and endanger Jewish people. Trump is putting Jews in danger to stir up his white nationalist base.

Trump’s antisemitic attack comes immediately after he accused Reps. Rashida Tlaib and Ilhan Omar of hating "all Jewish people" — a blatant lie and part of the right-wing playbook of weaponizing antisemitism against progressive women of color.

It’s shameless and shameful, and it’s absolutely dangerous for Jews, Muslims, and so many of our communities.

Add your name to the open letter: We are disloyal to Trump and his white nationalism.

We know who said there were very fine people on both sides in Charlottesville: Trump.

We know who mainstreamed antisemitic conspiracy theories that motivated the shooters in Pittsburgh and Poway: Trump.

We know who would love for Jewish voters to avoid the polls in November: Trump.

This is the perfect moment to amplify the Jewish resistance to Trump, who is desperately trying to both peel Jewish support away from the Democratic Party and use us to destroy black and brown-led movements for progress.

We won’t let him win.

Sign the Disloyalty Pledge to reject Trump and his white nationalist agenda.

Donald Trump became president in 2016 thanks to 80,000 people in three states.

Being disloyal to Trump is how we remain loyal to our core value of justice for all.

Thank you for raising your voice on this critical day.