On July 2nd, Bend the Arc helped bring a group of Jewish leaders and rabbis to San Diego to shut down ICE in a full-day mobilization organized by the visionary leaders of Mijente, and I want to share some of the highlights with you.

Our group — including T’ruah, JFREJ, and others — began the day with a minyan in Chicano Park to sing and pray together before a day of bold action.

Then we joined a beautiful crowd of people marching through the streets of San Diego, led by frontline communities, chanting "This is for our people who are locked inside, together we will abolish ICE."

The day was designed to spotlight the expansion of Operation Streamline — assembly-line convictions of migrants that deny them due process — from Texas and Arizona into California. In addition to the art-filled march, people participated in escalated actions, including:

At a time when the government is escalating their attacks on immigrants, it’s important that we escalate our resistance. You can see and share all the photos on Facebook here for inspiration.

While the action was happening in San Diego, Bend the Arc published our Declaration of a State of Moral Emergency in the country’s largest Spanish-language newspaper, La Opinión. 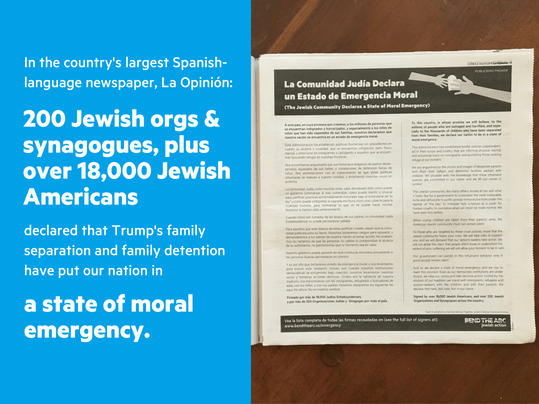 The ad includes the Declaration in both English and Spanish. To see the list of 200 organizations and synagogues who signed, plus the full ad, visit bendthearc.us/emergency.

Finally, if you were one of 400,000 people who marched this weekend at more than 750 events to keep families together — thank you.

In front of 35,000 attendees of the DC Families Belong Together rally outside the White House, Rabbi Jason Kimelman-Block, our Washington Director, introduced Psalm 146 by saying:

Our tradition, our sacred texts, our history, our values, our community all compel us to continue resisting — to keep this issue front and center, to counter the lies and authoritarian policies of our government, to fight to save the soul of our nation.

As much as we may be unnerved and frightened, American Jews are finding the courage and boldness to come together to take the risks this moment demands. Let's keep it up.